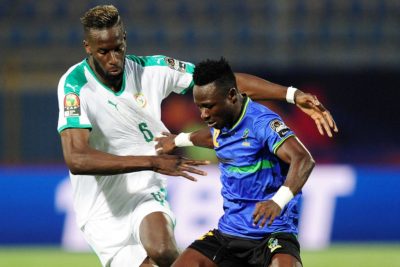 Africa Cup of Nations hopefuls Senegal kicked off their quest for an elusive maiden title on Sunday with a dominant 2-0 win over a Tanzania side making a first appearance at the tournament since 1980.

Senegal are tipped as leading trophy contenders alongside hosts Egypt, and the Teranga Lions proved far too formidable for their opening Group C opponents despite the absence of suspended star forward Sadio Mane.

Keita Balde fired Senegal ahead on 28 minutes in front of a sparse 30 June Stadium crowd on a pleasantly breezy evening in Cairo and Krepin Diatta added a magnificent second just past the hour to seal a comfortable opening victory for the 2002 runners-up.

Boasting a squad comprised solely of European-based players, Aliou Cisse’s side made the gulf in class against a team featuring seven starters from the Tanzanian league markedly clear with an early flourish that saw Mbaye Niang draw a sharp stop from Aishi Manula and then flash another chance narrowly wide.

Tanzania forward Mbwana Samatta, whose 23 goals helped fire Genk to the Belgian championship this year, was left hopelessly isolated against a robust defence including Napoli standout Kalidou Koulibaly, with Cheikhou Kouyate slotting in alongside him following an injury to Salif Sane midway through the half.

Senegal soon grabbed the lead as Idrissa Gueye slid the ball across to Balde after a surge forward, the Inter Milan winger lashing home low inside the near post with Manula beaten by the pace.

Ismaila Sarr presented a constant threat down the right for Senegal and the Rennes trickster laid off for Kouyate moments later only for the substitute to scoop comfortably over.

Senegal appeared to have a second goal on 34 minutes when Sarr poked home after a fumble by Manula but the referee ruled the effort out for a supposed handball.

With Senegal ranked 22 in the world and Tanzania 131, this was on paper the biggest mismatch on paper of the 36 first-round matches in Egypt, and only a matter of wasteful finishing spared Tanzania a heavier defeat.

Niang twice fluffed clear-cut openings to add to the advantage, failing to make any telling contact when Sarr squared to leave the forward with a relative tap-in.

It required a flash of brilliance from Club Brugge midfielder Diatta to finally give Senegal a bit of breathing space, as he connected sweetly on the half-volley to power in a second from 20 yards after a corner was only partially cleared.

Coach and former captain Cisse was told to win the competition or face the consequences when his contract got renewed, and while this was a promising start for Senegal there will be far tougher obstacles to overcome than the second-lowest ranked side in the event.