This was as seen on Kemi Olunloyo’s Instagram page.

#BREAKING Someone in the Nigerian Police has reportedly tainted the #Coza pastor investigation. The petition has leaked to the hands of a reporter.

Rape allegation: Fatoyinbo may have won in court but his name is in…

Busola Dakolo, other Nigerians react as the first National Sexual…

What I see is a full-blown PERSECUTION case against Pastor @biodunfatoyinbo by an unidentified cabal of pastors, businessmen and dark people from Nigeria’s public sector. 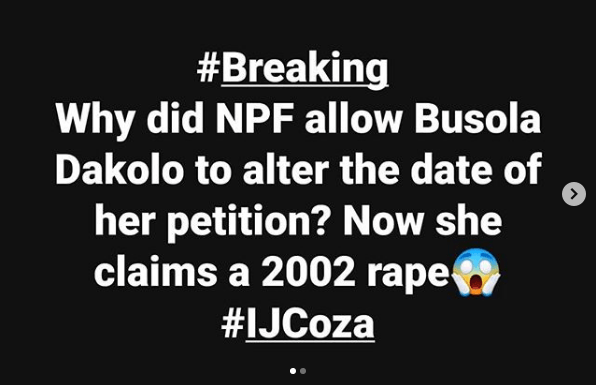 There is corruption in the police force and this is NOT the time for it. Here is a law enforcement agency my own grandfather led as #2 cop in the glory days.

Mrs @busoladakolo who is now a well sought VERIFIED “forced” public figure due to her rape allegations suddenly has a timeline in the rape case. Busola is not a public figure but the wife of a singer who brands herself a “Celebrity photog” with no portfolio or platform to show her works.

However, this rape case has made her well sought for verification by @mosseri. There are now two different “rape dates” 2001 and 2002. Pay attention to what I said @tvcconnect in July 2019 where I said she had no timeline.

All Mrs Dakolo did was recanted Jules Woodson’s story of how Pastor Andy Savage’s rape case of the then 17yo being taken home and got sexually assaulted. I have been talking to the American reporters and police investigators who worked that case and one of the biggest opinions of the Dakolo case is that NPF has no physical or forensic evidence on this case.

This case may be the one which could finally DISGRACE the NIGERIAN police force who is struggling with image right now. I strongly URGE IGP Adamu not to allow this. This investigation must be transparent. No media touched it.