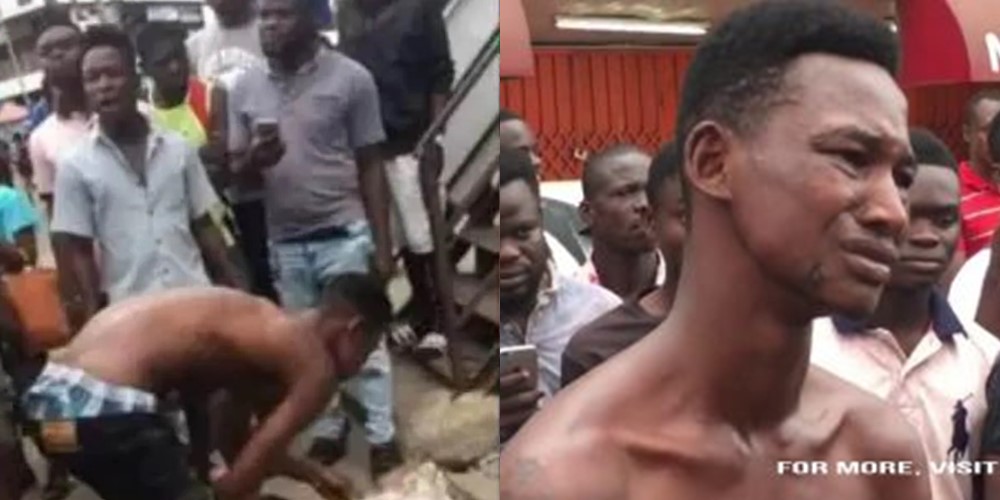 While mob justice appeared to have been normalized in Ghana, the recent action of persons who caught a young man red-handed stealing in a shop at the Kwame Nkrumah Circle restored sanity to Accra’s biggest busiest centre.

Eyewitnesses say Kofi Yesu, also known as Guy Guy, sneaked into one of the shops at Odo Rice while the owner was participating in a regular cleaning activity that was organized on the day set aside for the purpose of Sanitation Day.

The alleged thief, Kofi Yesu manged to successfully pick and conceal a bag containing ghc700, (N46k) and an iPhone X mobile phone in his attire while he lurked in wait for the right opportunity to bolt.

Guy Guy was interrogated after other people joined in exchange of words. He later confessed to stealing.

However, Guy Guy was made to desilt gutters as punishment for his offence.

Guy Guy told traders that he is a resident of the Konkomba Market in Accra. And paid GHc 10.00 to have a motorbike rider transport him to his destination.

Like the popular saying goes; 99 days for the thief, one day for the owner and in this unfortunate thief’s case, the owner’s day is one he will definitely not forget in a hurry as many hope it will be life changing for him.

According to a Twitter user who shared photos from the incident, he was caught stealing but rather that met out jungle justice as is usually the case in Nigeria, he was made to clean their gutters.