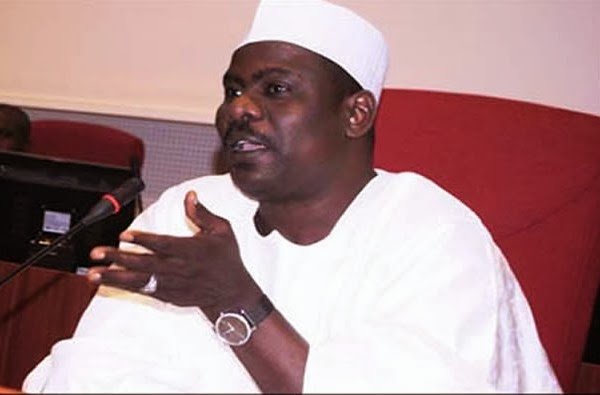 The group made this known at a press conference on Wednesday in Abuja in reaction to the Borno South lawmaker’s assertion about the Nigerian Armed Forces.

In a statement signed by Secretary General, Dr Bolaji Abdulkadir, the NDF reckoned it was time to address Senator Ndume’s inglorious role in the Boko Haram conundrum.

According to the group, Mr Ndume, who was once heavily linked to the Islamic sect, genuinely knows about its activities and may be enjoying some benefits.

The Senator’s recent claims that 847 soldiers were lost in the insurgency, the group stated, only confirms his ties with the group.

While the Nigerian Army has asked the former Senate Leader to substantiate his claim, the NDF asked Nigerians not to take him in a solemn manner, especially knowing his history of substance abuse.

The group further cautioned the lawmaker to desist from spreading falsehood in a bid to cover up for all the atrocities he has perpetrated in Borno.

The National Democratic Front is constrained to convene this Press Conference in light of the shameful and dishonorable statement credited to Senator Ali Ndume, the Senator representing Borno South Senatorial District of Borno State, wherein he mischievously stated that over 847 soldiers had been killed by Boko Haram and buried in Borno cemetery.

The National Democratic Front wishes to state that the statement credited to Senator Ali Ndume is not only mischievous, it is indeed a testament to the fact that he genuinely knows more about the activities of Boko Haram and probably benefiting from it.

The National Democratic Front wishes to inform members of the general public that Senator Ali Ndume is not one whose perceived contribution to the national discourse should be taken seriously, not even with the fact that he is a Boko Haram sponsor despite the kangaroo judgment he secured from the courts when he was arraigned for terrorism related offences some time ago.

Senator Ali Ndume has a long history of substance abuse and we are constrained to believe that his recent utterances might be as a result of the same substance overdose and as such his views on national issues should be viewed with a pinch of salt.

The National Democratic Front views his utterances as insensitive, and an affront to the sensibilities of those whose families and relatives have been affected in one way or the other by the Boko Haram crisis.

It is also an affront on the constituted authorities, especially the Armed Forces of the Federal Republic of Nigeria, who have toiled day and night in the past ten years to bring the nefarious activities of the Boko Haram terrorist to an end.

Senator Ali Ndume by his action of bandying false figures on the casualties suffered by our Armed Forces indicates that he is in bed with the Boko Haram terrorist group, else how can one explains how an individual that is not and has never been to the theatre of operations know the exact number of casualties.

The National Democratic Front also frowns at the assertion by Senator Ali Ndume that North-East Nigeria is a no-go zone. This assertion is at best uncharitable and an indication that there might be a sinister motive which in our opinion, might be aimed at diverting the attention of stakeholders on how some politicians, including him, have exploited the people on whose mandate they rose to prominence.

The National Democratic Front is also appalled that a supposed Senator from Borno state is not aware that scores of Civil Society Organisations have been visiting North-East Nigeria on assessment tours and issued reports on how the politicians have been exploiting the people and festering the crisis so they can continue to smile to the bank.

It is also instructive to state that Southern Borno, where Senator Ali Ndume represents in the National Assembly, is the worst hit in terms of how politicians have manipulated and deprived the people while enriching themselves by diverting resources meant for the provision of basic amenities to private pockets.

The National Democratic Front wishes to advise Senator Ali Ndume to stop using Boko Haram as a political tool to impoverish his people whose only crime was voting him into power. This is on the heels that since his foray at the National Assembly, there is no evidence of any constituency project initiated and executed by Senator Ali Ndume in Southern Borno Senatorial District of Borno State. The likes of Senator Ali Ndume have succeeded in causing untold hardship to his people, and that accounts for why he is hardly seen in Borno State because of his nefarious activities.

The National Democratic Front wishes to charge the various security agencies to watch the likes of Senator Ali Ndume carefully because he has a history that is laced with suspicion, especially with the propagation of the activities of the Boko Haram group.

This is so because we strongly believe that Senator Ali Ndume is yet to tell the country his role in the kidnap of the Chibok girls. The activities of Senator Ali Ndume must be scrutinised by the security agencies with a view to solving the Boko Haram conundrum.

The National Democratic Front consequently wishes to advise the unsuspecting members of the general public to disregard henceforth anything coming from Senator Ali Ndume until he tells us what he knows about the Boko Haram group and how he has been secretly funding its nefarious activities all in the name of politics.

The National Democratic Front, in the same vein, wishes to advise Senator Ali Ndume to desist from spreading fake news in a bid to cover up for all the atrocities he has perpetrated against the people of Borno State.

He should, as a matter of urgency, seek forgiveness from his people and henceforth desist from commenting on national issues because he lacks the moral authority to do so.