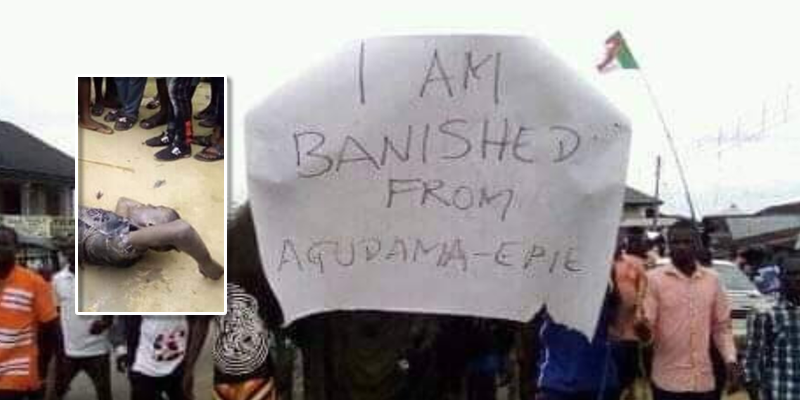 It was a day of revenge and possibly retribution for a notorious criminal who is known for various forms of social vices as he finally met his waterloo.

The suspected notorious criminal identified as Supreme was banised from Agudama Epie in Yenagoa, Bayelsa state after causing great havoc and tension in the community.

WITHIN NIGERIA learnt that the suspect was beaten and paraded around the community before he was later banished after terrorising the community.

President of AYM, Comrade Prudent Izibeyame and his members reportedly led the banishment as Supreme was sent out of the community on the basis of allegations of rape, robbery, cultism and other criminal activities.

In other news, ahead of the Gubernatorial Election in Bayelsa state, the All Progressives Congress (APC) has accused the opposition Party, PDP of manufacturing fake PVCs, APC claimed it has uncovered fake Permanent Voters’ Cards (PVCs) allegedly manufactured in large scale by the Peoples Democratic Party (PDP).

In a statement signed by its Deputy National Publicity Secretary, Mr Yekini Nabena, in Abuja on Friday, APC alleged that the fake PVCs have been code-named “Biafra Cards” by the PDP.