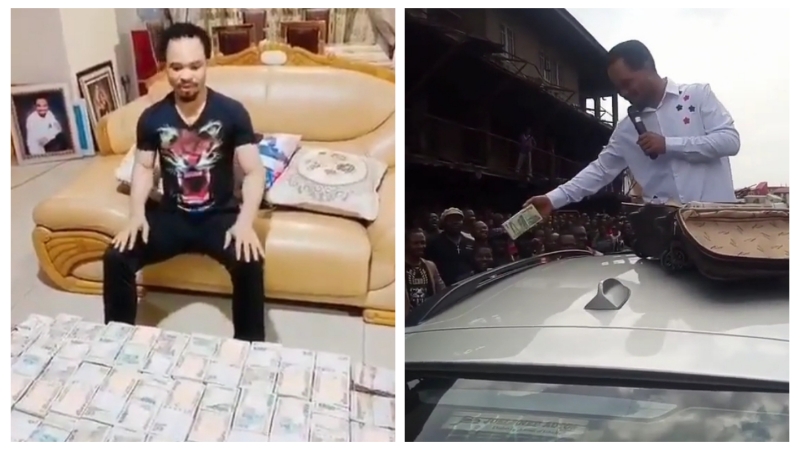 Barely 24 hours after the video of one Prophet Chukwuemeka who promised the sum of N4m cash donations to victims of fire-oubtreak in Ochanja had gone viral, another video of the same prophet addressing multiple people and distributing cash rewards has surfaced online.

The prophet identified as Chuwuemeka disclosed in the first video that his church is prepared to go and commiserate with market people who lost their goods in Ochanja fire outbreak for the sake of Christ.

He announced that the sum of four million naira (N4m) would be distributed in form of cash on Saturday to assist the needy, hopeless and strengthen them. He further added that the victims of the fire outbreak need to know that Jesus loves them, did not abandon them and they (church) are feeling the pains more than them.

However, the second video of the said prophet disturbing cash rewards to some victims of the fire outbreak has emerged on social media and generated reactions from social media users.

Inside the second video, the prophet could be seen speaking in proverbial way or parables as he engages his large audience in Igbo language. He insisted that they have prepared as usual and to people who attributed their past acts with toga of “no sense” they will make sense out of it.

“Any person whose battery remains 1 percent does not play game. If they conclude that our act is senseless, we will make sense out of it. Someone who is naked will not put his or her hand inside pocket. As we have prepared today exactly the same way we have always been prepared. If the light goes off, we will use a powerful power bank and instead of them to cease our light, they will cease light of others, he said.

After his short address, he called on victims of the fire outbreak who were already on queue and handed over an undisclosed amount of money to two victims before the second video’s clip ended.

How billionaire Ignatius Odunukwe was killed, cut to pieces by criminals (Video)

UPDATE: Alex Ogbu, the journalist covering Shiites march in Abuja has been shot and killed