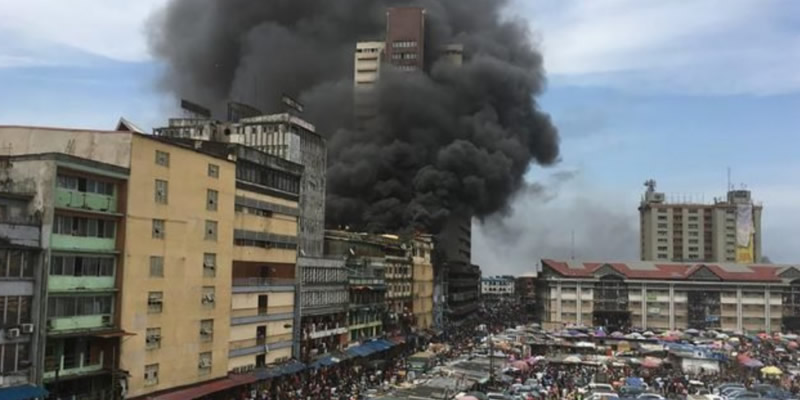 A policeman has been confirmed killed after the front section of a six-storey building engulfed by fire located at 43 Martins street, Lagos Island, collapsed around 8:30pm on Tuesday.

According to reports, the policeman died while he was trying to control the surging crowd when part of the burning building collapsed on him. He was immediately rushed from the scene for emergency medical treatment but he died in hospital following injuries sustained in the building collapse.

Narrating the sad incidence and how it was brought under control, the director general, Lagos State Emergency Management Agency (LASEMA), Olufemi Oke-Osanyintolu said:

“We received call earlier this morning that there is a fire incident that involves two multistorey buildings at Martins Street and Dosumu Street in Lagos,” he said.

“Immediately we activated our emergency response plan and other stakeholders in managing emergency moved to the scene.

“We are able to locate and localise the fire but the major challenge we are having is access to major source of the fire; secondly, we discovered that they stored highly inflammable materials in the building.

“The way the building is positioned is adjacent and interlocked to the centre area, but we make use of combined team method to localise the fire which spread from one shop to the other but we are trying to put it off now.”

Armed robbers kill couple in-front of their children in Umuahia