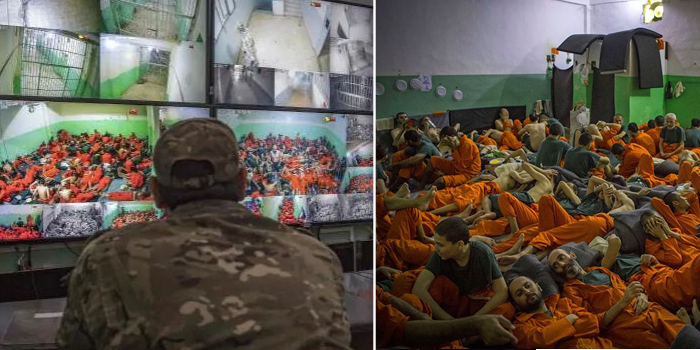 PHOTOS: Inside an IS prison in Syria

These are the remains of the Islamic State, a once sprawling kingdom built by foot soldiers from around the world to terrorize and enslave those they conquered.

Photos from inside a Kurdish-run prison in northeastern Syria show hundreds of suspected Islamic State members awaiting their fate.

AFP photographer Fadel Senna was granted access on Saturday to the prison in the city of Hasakeh in the country’s northeast, about 50km from the Turkish border.

The same day, IS leader Abu Bakr al-Baghdadi died in a US military raid on his compound just outside the northwestern village of Barisha, more than 400km away.

Behind the steel entryway, the men packed into inadequately invigorated prisons, for example, this one in Hasakeh hail from many nations that don’t need them free – however don’t need them back either.

With 5,000 detainees – Syrian, Iraqi, yet in addition British, French, German – the jail is overflowing with the junk of the global jihadist armed force IS raised five years prior.

A portion of the prisoners are youngsters, and none of them have been under the sun even once in months or more.

Their dark froth beddings cover to cover the virus floor, with just one corner of the cell taken by a fundamental, half walled-off pit lavatory.

Crashed Ukrainian airplane was shot down by Iranian anti-aircraft missile –…