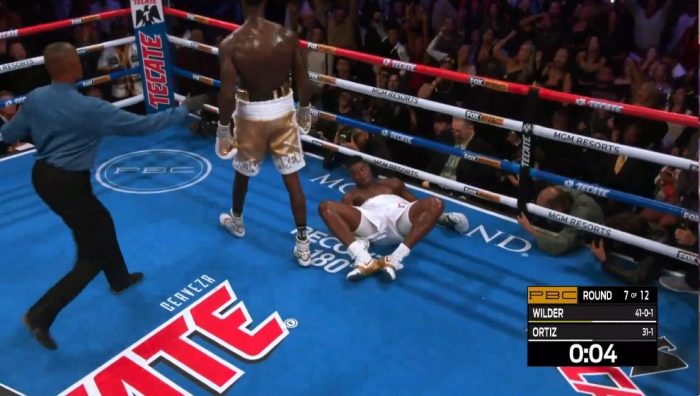 Wilder knocks out Ortiz in 7th Round

America’s Deontay Wilder defended his WBC world heavyweight title with a stunning knockout of Luis Ortiz in the seventh round.

Ortiz was clearing leading until the seventh round when the Bronze Bomber delivered a stunning punch to end the contest.

The American looked on course to see his world-title reign ended just short of five years as Ruiz picked him apart for half of their Las Vegas rematch.

But in the seventh round, Wilder’s devastating right hand left Ortiz stunned and beaten on the canvas.

“I found my measurement, seen the shot and took it,” said Wilder, 34.

Ortiz, 40, made it to his feet but could not beat the 10 count and was left with a look of shock on his face as Wilder had barely thrown a combination or landed a punch of significance, BBC reports.

The defeated Cuban was left beating the ropes with his fists in frustration after bamboozling Wilder with feints and footwork, while boxing at the kind of timid pace he looked capable of maintaining.

The baddest man in boxing. What a KO by Deontay Wilder. 🥊 #WilderOrtiz pic.twitter.com/UU3CnCmCd4

He found repeated joy from his tricky southpaw stance with the left hand and after landing repeatedly on Wilder in the fourth, the champion beat his chest with both hands as he clearly knew he was second best.

But Wilder has built a reputation as one of the most destructive punchers in boxing history and his straight right hand chalked up a 41st knockout from 43 outings.

In doing so he moved level with Muhammad Ali in recording 10 straight title defences. Only Tommy Burns (11), Vitali Klitschko (11), Wladimir Klitschko (18), Larry Holmes (20) and Joe Louis (25) have managed to defend the heavyweight crown more times in a row.