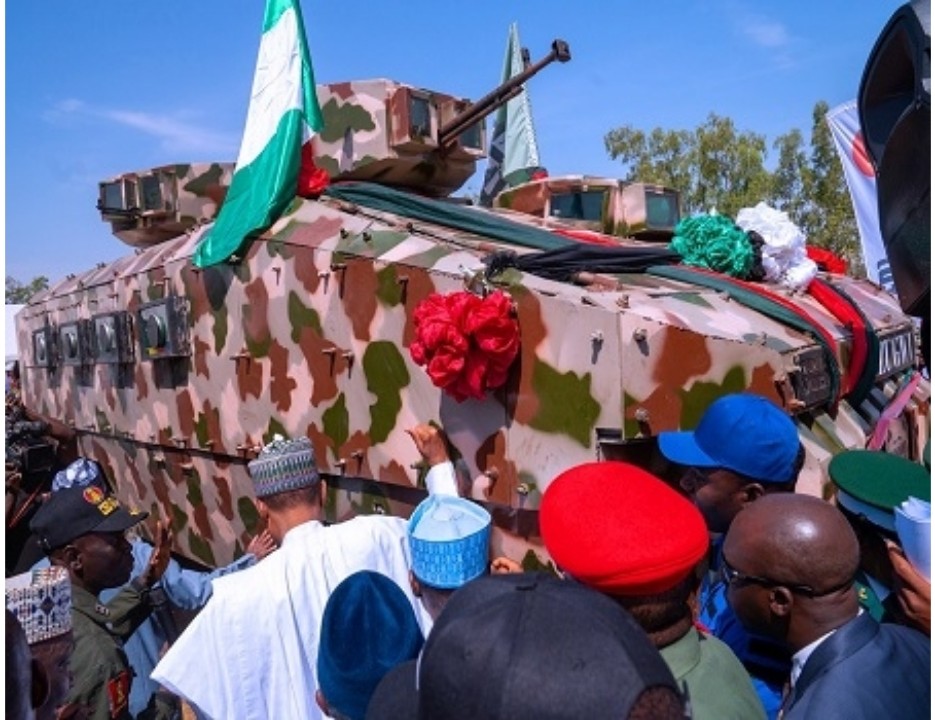 As part of effort to address security challenges, President Muhammadu Buhari has commissioned made in Nigeria military war vehicles known as Mine Resistant Ambush-Protected vehicles (MRAP), which will be used against the insurgents in the North-Eastern part of the country.

President Buhari who departed his home town of Daura in katsina on Tuesday, to commission the war vehicles in Kaduna at the opening of the 2019 Chief of Army Staff Annual Conference, commended the Nigerian Armed Forces and the Army in particular for their efforts in defending the country.

The President assured that his government has resolved to do everything within its constitutional power to ensure the security and safety of the law-abiding citizens of Nigeria.

He, however, told men of the Armed Forces to continue to abide by their ethics, the rules of engagement and code of conduct, Human Rights and international humanitarian laws in the conduct of their military operations.

The President lauded the Army, saying that, their conduct of exercises and training were quite commendable, as he is aware of ongoing key exercises in the country.

According to the President, “I note the collaborative efforts of the Command Engineering Depot with relevant indigenous organisations to promote local contents towards developing our military-industrial complex. I am glad with the production of the Ezugwu Mine Resistant vehicle and others which were earlier produced as testimony that our efforts are yielding results.

“This administration has continued to provide resources and carried out transformational projects with the sole aim of modernising the Army in a better position to perform its constitutional roles.

“In this regard, it is pertinent to acknowledge the establishment of Army University Biu and the Army Resources Centre alongside the War College to further boost intellectual capacity in the forces. These are efforts to confront emerging threats to our national security.

“I salute the gallantry efforts of the personnel of the Nigerian Army. I am highly impressed with the conduct of your operations by continuing to flush out terrorists from their hiding places.

“The conceptualisation and institution of the concept, Operation Lafiya Dole Theater has maintained the momentum against terrorists. I urge you to sustain these great efforts.

“This government is aware that activities of the Army came with key consequences, with some personnel who have sustained various injuries. I once again send my condolences to those who have paid the supreme sacrifices in an effort to secure this country. May their souls rest in peace.

“I urge our soldiers to continue to abide by their ethics and keep to the rules of engagement and code of conduct while ensuring that Human Rights and international humanitarian laws are promoted and respected in the conduct of military operations.

“Let me at this point reiterate our government’s resolve to do everything within its constitutional power to ensure the security and safety of the law-abiding citizens. This is a commitment we have made and will continue to keep.

“At this juncture, I wish to commend the Chief of Army Staff’s laudable effort of transforming the Nigerian Army. He has keyed into the Federal Government’s change agenda and I commend his job in the area of innovative and inventive approach to produce military hardware, infrastructural development, restructuring and reorganisation among others with significant results; particularly in the ongoing counter-insurgency and other operations across the country.

“This government will continue to support the Army to sustain these laudable initiatives aimed at repositioning you to deal with contemporary security challenges and to achieve a modern army of the future.

“To the members of the Armed Forces, I want to reiterate the government’s commitment to your welfare. We are aware of some of the challenges, particularly in the areas of training, manpower and infrastructures. We will continue to do all within the available resources to provide for your operational and welfare needs, particularly in the area of healthcare for your personnel and their families.

“I am therefore delighted that later this afternoon, I will be commissioning the blocks recently completed, equipped and furnished in the 44 Nigerian Army Reference Hospital, Kaduna, which will not only provide excellent medical services for our troops but also serve the need of the United Nations personnel as level four hospital.”

‘No one celebrated my life when I had ghastly accident, fake love everywhere’ – Yul Edochie