Genevieve Nnaji is a celebrated actress and movie producer who is a screen goddess and is celebrated in Nigeria and beyond. The actress has experienced the ugly, bad and good sides of her career and she did not let any of her experiences define her.

Genevieve Nnaji was born on May 3rd, 1979 in Mbaise, Imo State, Nigeria to Mr. Theophilus Nnaji and Mrs. Benedatte Nnnaji. Her late father worked as an Engineer while her mother worked as a teacher in Lagos. She has five siblings and she is the fourth.

Nnaji had her secondary education at Methodist Girls College, Yaba, and later proceeded to the University of Lagos to study Theatre Arts. Due to some certain occurrence, she got pregnant at a young age and gave birth to a beautiful girl, Chimebuka.

According to Genevieve, she didn’t know she was pregnant until it was too late to consider an abortion. Her Catholic parents due to their beliefs strongly stood against harming the unborn child. They said it pointless to cover an evil deed with another evil deed.

Hence, she gave birth to the baby and nurtured the baby at home. This event caused a delay in her studies, but she got into the university after the child was born.

Her career in acting began when she appeared, aged eight, in the defunct TV show, “Ripples”. She also played a part in several commercials, including one for Pronto beverage and Omo detergent. Her full Nollywood debut however came in the year 1998, when she featured in the movie “Most Wanted”, at 19 years of age.

After starring in the movie ‘Sharon Stone’ in 2002, she shot to such prominence that the rest of Africa and several European countries became aware of her presence as a force to reckon with in the movie industry. Her subsequent movies include Last Party, Mark of the Beast and Ijele. She also starred in the award-winning  Iié: (The Journey) in 2010, and, now believed to be the highest-paid and most desired actress in Nollywood today, the actress has starred in over 80 Nollywood movies.

She became the ‘Face of Lux’ in 2004, and graced several other billboards and television stations with her strong charm and personality. That same year, she signed a recording contract with EKB Records, a Ghanaian record label, and released her debut album, “One Logologo Line,” a mix of various styles of urban music.

In the year 2009, Genevieve made history by being the first Nigerian actress to be profiled on ‘The Oprah Winfrey Show’ on an episode about the most popular people around the world. She also appeared in Maria Claire Magazinealongside Halle Berry, Jennifer Lopez, Jennifer Aniston, Catherine Zeta-Jones, and Paris Hilton in an article about who is the most beautiful woman in your world, in which she came fourth.

The actress introduced her clothing line, ‘St. Genevieve’, in 2008, with which she gives back to the society, as some percentage of its proceeds are given to charity and orphanages. The star actress in 2015 showed she can be more than an actress when she took her first role as a producer for the movie ‘Road of Yesterday’. Road to Yesterday is an epic love story about a couple tying to mend their marriage on a road trip to a relative’s funeral.

In 2017, she debut as a film director in her second movie, Lion Heart. In her interview with Vanguard, she said ‘Film is what I love to do. Lion Heart is the beginning of a journey to explore and express my creative interpretation of storytelling – particularly African Stories.’

The movie is a tale of the hurdles of an Igbo family that runs a transportation business. The film which was shot at different serene locations in the eastern part of Nigeria will be launched at the 2018 Toronto International Film Festival (TIFF).

Nollywood actress, Genevieve Nnaji said that she is a woman who has a right to choose and can do whatever she feels like. Genevieve, who spoke as a guest speaker at the recently held London School of Economics Africa Summit in London, said feminism is human rights which gives her the ability to make choices on her own terms.

“My own feminism is just human rights. I’m a woman who has rights to her own choices; I can do whatever I want whenever I want. “It’s just that simple; if I were a man, it would be the same thing.

“At the end of the day I was born alone, I’m going to die alone, I breathe alone. So I definitely have the right to how I want to live my life,” the 39-year-old award-winning actress said.

The veteran actress was romantically linked to several actors in Nollywood. Ramsey Nouah, RMD, Pat Attah and others are some of the men she was rumoured to have dated. Genevieve was once said to have dated a topmost politician in Nigeria, apart from other alleged sexcapades here and there. Though she has become the face of a popular vehicle manufacturer, her sex life in the industry can never be easily forgotten in a hurry.

In 2017, reports came up that the Nollywood superstar Genevieve Nnaji secretly got married to someone. According to the media, she chose to do it in Portugal because she wanted to keep her marriage secret, away from general attention.

The source close to the famous actress reported that Genevieve chose the secret wedding ceremony because she had a lot of relationships in the past that ended with backlash, and this time she decided to opt for the secret wedding. There were even rumors that Genevieve wants to move away from Nigeria and settle down somewhere else. Obviously, so many fans now want to know the name of this mysterious man who won the heart of beautiful and charming Genevieve Nnaji. 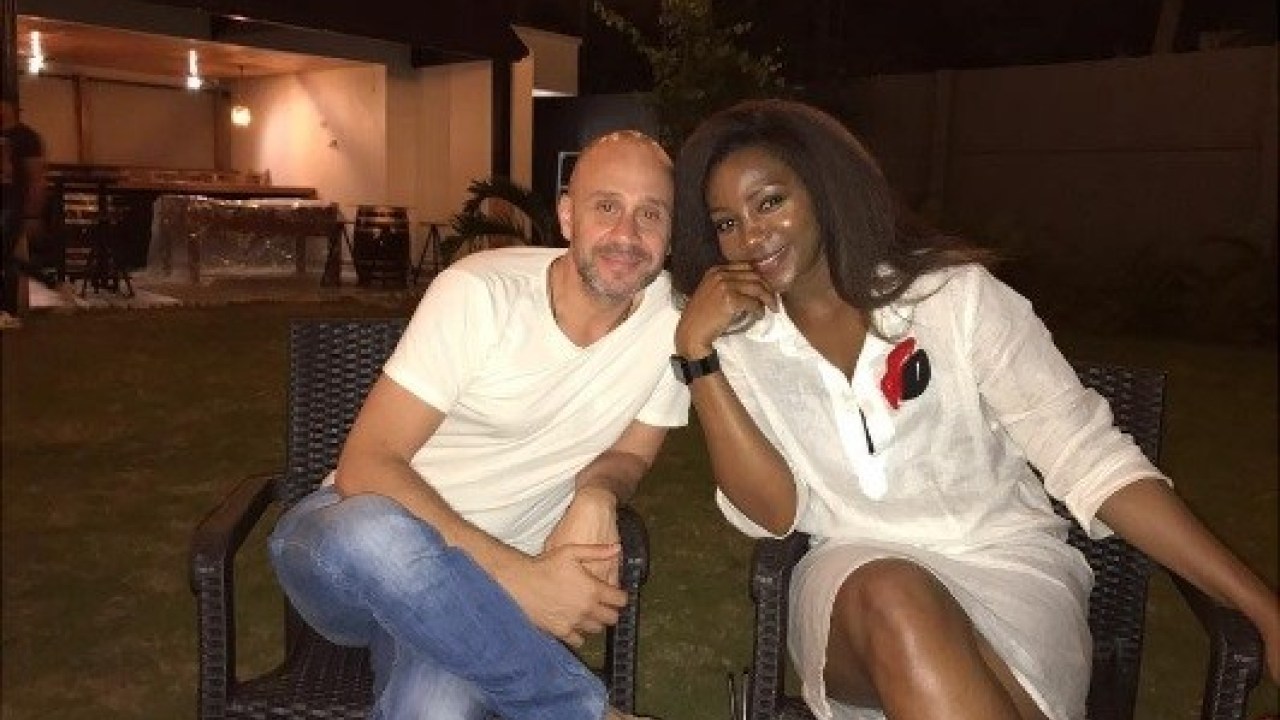 However, she has never disclosed the identity of her husband. She once posted a photo with the European man on her Instagram, and many fans assumed it was Genevieve Nnaji husband, but it was never confirmed by Genevieve herself. She is known for protecting her personal life, as for a long time she did not want to reveal her daughter to the media, so it is no surprise that she wants to keep everything as private as possible.

The beautiful daughter of famous actress Genevieve Nnaji got married to her sweetheart not so long ago. She had a beautiful wedding ceremony in 2016. The young lady, who is basically a spitting image of her gorgeous mother, married her beloved man Prince Osi Chigozie Ikediwa. Chimebuka’s husband comes from Texas, but is Nigerian.

Their traditional wedding ceremony took place in Mbaise, which is in Imo State. Mbaise is a hometown of Genevieve Nnaji, and of course, she was present on this beautiful ceremony too. Chimebuka and Prince met in 2009 in Lagos.

They have been together for a long time, and finally decided to tie the knot to solidify their eternal love.Rumors circulated that Chimebuka had a baby of her own recently, which made Genevieve Nnaji a grandmother. But it is hard to verify if these gossips are true or not.

Genevieve has posted a few photos with a cute baby on her Instagram, as we saw a couple of weeks ago. However, it appears to be a child of her friends. So, it is hard to say if Chimebuka has already become a young mother or not. After all, she does not make her life very public.

Cinema screening of ‘Lion Heart,’ the directorial debut of veteran actress, Genevieve Nnaji has been halted due to alleged industry controversies.

The News Agency of Nigeria reports that although the movie was purchased by Netflix in July, Nnaji’s team announced last Friday that its cinema screening in Nigeria would commence on December 21.

Later, a viral statement from the ‘Lion Heart’s team alleged that the “powers that be” (distribution companies) have refused to show the movie in their cinemas.

The statement further claimed that one of the major distributors, who had agreed to show the movie, backed out of the deal after they were“arm twisted”.

Reacting to the statement, Patrick Lee, chairman of the Cinema Exhibitors Association of Nigeria clarified the association’s position in a public statement.

He said that the Lionheart team did not adhere to the processes involved in exhibiting a film in cinemas in the country that’s why most of its members “rightly refused to take the movie.”

“And also for our cinemas to be provided with adequate notice for the inclusion of the movie in an increasingly crowded calendar.

“It is clear from the approach taken by the Lionheart team that these processes were not adhered to and most of our members rightly refused to take the movie.

“It is also important to note that this movie had been signed up by Netflix months ago, thereby giving Genevieve’s team ample time to secure a spot on the calendar.

“An option they did not take until quite recently thereby ensuring the possibility of the movie not being shown by cinemas during their preferred date.

“Genevieve has starred and produced movies for cinema exhibition in the past so should be familiar with the way the industry works which is why this is a cause for concern for us in the cinema association.

“Finally it’s worth pointing out that other movies such as Chief Daddy, KOB and Merry men had all been slated from early March this year.

“Mo Abudu, AY and Kemi Adetiba who are industry compatriots of Genevieve’s followed the right approach by scheduling early for cinema release.

“It’s not fair that they may now possibly have their screen times reduced because of the rushed inclusion of Lionheart in the cinemas.

“We at the cinema association are also not pleased about the attacks in the statement on some of our members and the sweeping generalisations the statement makes,” Lee said.

Lee added that the association expects to seek further clarification from its author before determining if further action needs to be taken.

NAN reports that ‘Lion Heart’ had successful screenings at the Toronto International Film Festival and Marakeuch, Morroco and will be available on Netflix in January, 2019.

Nnaji is not married but has a daughter, Chimebuka Nnaji, who was born when she was 17 years old. Rumor has had it that she had some relation with Dbanj and Atiku Abubakar at some point. However, she has not come out open on that issue.

In September 2017, it was reported that she had a secret wedding in Portugal to avoid the prying eyes of the media. According to the movie sources, Nnaji’s trip to Portugal was not unconnected with her secret wedding.