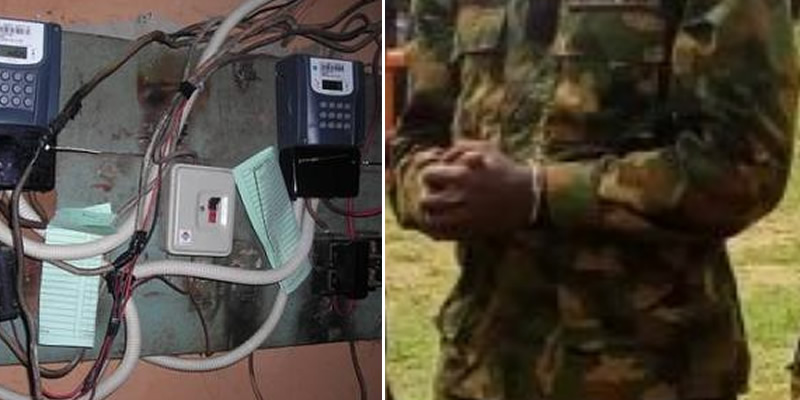 Following an alleged assault and brutal attack on one Khadijat Umar, a staff of Abuja Electricity Distribution Plc (AEDC) by a soldier in the Nigerian Army identified as Corporal Ibrahim Auta NA07NA2672 of the 266 Light Battalion which happened on February 13, Thursday, WITHIN NIGERIA reliably gathered that Corporal Ibrahim is currently assisting the Mararaba Division of the Nigeria Police to unravel and reveal why he inflicted a deep cut on the head of the electricity distribution company”s staff.

WITHIN NIGERIA had earlier reported that similar event ensued in Bosso area of Minna, the Niger State capital last week after the Superintendent of Customs identified as Mr. Iliyasu Ayuba attempt to shoot two staff of Abuja Electricity Distribution Company (AEDC) for disconnecting electricity supply to his house last Friday.

Reacting to the incident, the Abuja Discos Mamagement has directed its legal department to speedily institute a civil suit and pursue criminal proceedings against the Army Corporal, Customs Officer and three other persons who had in the last few weeks assaulted AEDC staff in order to serve as a deterrent to others.

According to eyewitness reports, the electricity staff, Khadijat Umar was on a house to house routine revenue recovery exercise with other colleagues when they found out that the house where Corporal Auta lives which was earlier disconnected had been reconnected.

After series of investigation, Corporal Ibrahim Auta admitted that the AEDC team came to his place and upon their arrival, his attention was drawn to their presence in his neighbourhood. When he came out, he saw that AEDC ladder was resting on the electric pole in front of his house.

According to accounts of some staff of Abuja Discos who were also present at the scene of the incident, Corporal Ibrahim Auta brutalized their colleague by flogging her with his army belt.

According to the staffs, when they arrived at Corporal Ibrahim Auta’s house, they saw that it had been reconnected though by records, the house ought to be under disconnection. Rather than produce his evidence of payment, Corporal Ibrahim Auta entered his house, came out with his Army belt and flogged Khadijat Umar.

Reacting to the incident, the MD/CEO stated that “in the last few weeks, AEDC has seen a sudden increase in serious assault occasioning harm visited on its staff. This is unacceptable to us as a business entity.

“We owe our workers the duty to provide protection for them in the course of doing their lawful work. We are currently working with the relevant security agents to ensure that those involved in this disdainful conduct including (i) Mr. Iliyasu Ayuba, the Customs Officer who used a service weapon to threaten our staff in Minna and forced them to reconnect him even when he is owing a huge debt, (ii) Army Corporal Ibrahim Auta who conducted himself in a manner contrary to service rules and regulations by beating up a harmless woman, and (iii) the old man that wielded two machetes against AEDC Staff whilst going about their lawful duties are brought to justice”.

The FCT Chairman of the National Union of Electricity Employees (NUEE) – Comrade Godfrey Abah and the FCT Branch President of the Senior Staff Association of Electricity & Allied Companies (SSAEAC) – Comrade Leticia Ejendu have disclosed that the two labour unions may be constrained to ask their members to withdraw their service and stop working in locations where any of them is attacked.

“Reports from our various members have shown an increase in attacks on our staff. These attacks are unlawful, unwarranted and provocative. Our members cannot work round the clock to provide electricity only for them to be beaten up and severely injured by some few misguided elements in the society when we go back to request payment for the services rendered. We have told management that if in future this is allowed to happen again, our workers will have to take appropriate lawful steps to protect themselves.”