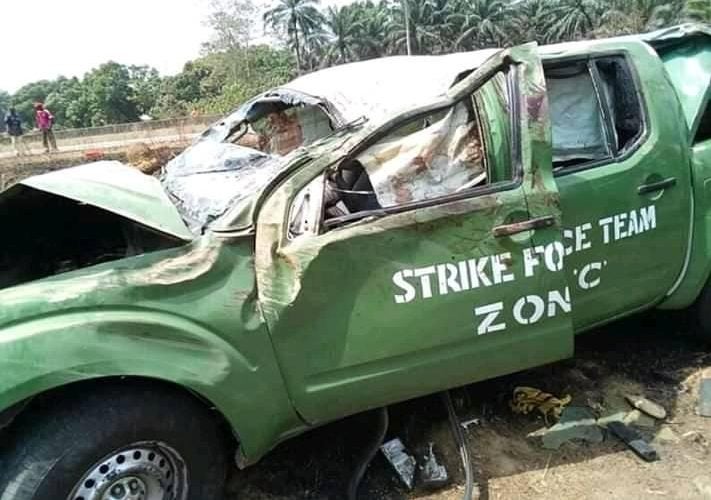 Four officers of the Nigeria Customs Service have been involved in a car accident in Akwa Ibom State while chasing suspected smugglers.

The incident happened over the weekend along Eket-Oron Road, in Akwa Ibom.

The spokesperson of customs, Joseph Attah while confirming the accident said No customs official died in the accident as being rumoured on social media.

“They have not died, they are responding to treatment.” he said.

“You know Nigerians, whenever somebody has an accident instead of them to help you they will just be snapping photos. Now, they don’t even know if the persons are okay!”

Mr Attah said that it is part of the hazards their officials go through daily while doing their job.

The identity of the officers is unknown at the time of filing this report.

They were said to be chasing a Toyota Sienna car when their pick-up truck somersaulted multiple times after hitting the Sienna.

Photos of the accident scene, with the badly damaged pick-up truck, have been posted on Facebook. The green-colour truck has the inscription ‘Strike Force Team Zone C’ on its body. Some blood stains could be seen around the vehicle’s door.

The Sienna, which was also badly damaged, was parked near the customs truck, by the roadside.

The customs, meanwhile, recently warned that it would shut down supermarkets and shops in Kano and Jigawa states found selling foreign rice and other prohibited items.

The agency in a letter to supermarkets and shops in the two states directed them to stop patronising prohibited items or risk being shut down.

The decision, the customs said, was meant to suppress the smuggling of prohibited items in the interest of the nation’s economy and security.

“We deem it fit to write and seek for your cooperation to stop patronising foreign rice and other prohibited items in your supermarket and shop to avoid being closed by Customs operatives,” the letter said.