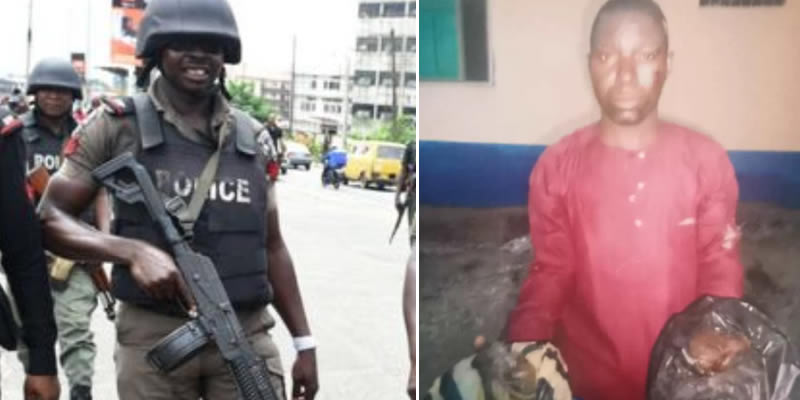 A 43-year-old man identified as Joshua Abraham has been arrested by the Ogun State Police Command for stealing the placenta of a newly born baby boy.

This was contained in a statement released by the Police Public Relations in the state, Abimbola Oyeyemi.

Oyeyemi said the suspect was arrested following a report made by one Raliha Zakara, the grandmother of the baby whose placenta was stolen at Ibafo Police Station.

According to the PPRO, Mrs. Zakara visited the Ibafo police station where she reported that the suspect who is her neighbor had gone to the hospital where the baby was delivered, and claimed to be the father.

He then asked for the placenta of the baby from the nurse on duty, on the pretext that he was going to bury it, and it was given to him as the nurse thought he was baby’s father.

The suspect, who is a neighbour to Raliha, came to the hospital, where Raliha’s daughter was delivered of the baby, and pretended to be the father of the newborn.  He demanded the placenta from the nurse on duty and it was given to him.

When the grandmother insisted that she should be taken to where he buried it, it was discovered that he had hidden the placenta but buried a dead rat.”

Upon the report at the police station, the DPO Ibafo division SP Abiodun Ayinde detailed his detectives to the scene where the suspect was arrested.

“It was discovered that the suspect had once been arrested for defrauding a police officer and a pastor of huge sums of money under the pretext of procuring Canadian visas for them and the case is being prosecuted in court.  He took detectives to where he hid the placenta and it was recovered.” the statement read

The state Commissioner of police, CP Kenneth Ebrimson has directed that a thorough investigation should be carried out and that the suspect should be charged to court as soon as possible