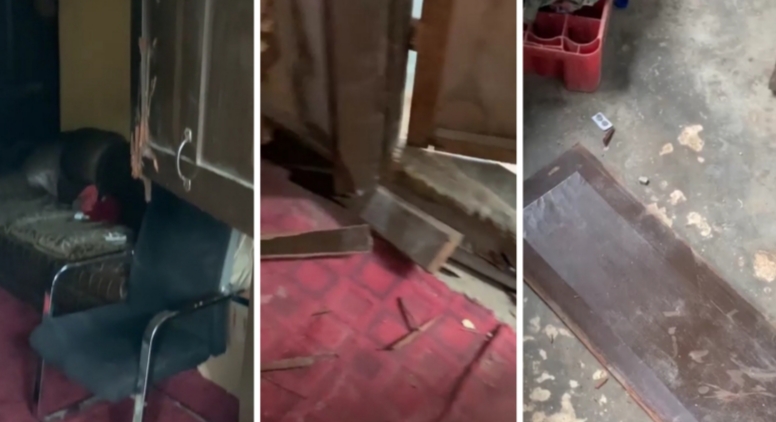 A yet-to-be identified young man has narrated how SARS officers allegedly stormed his house to arrest him and ended up destroying his properties because he bought iPhone XI.

WITHIN NIGERIA gathered that the incident happened around 9pm on Monday, 4th May before the young man narrates the incident.

According to the young man, he said SARS officers broke his door and demanded the sum of N500000 as negotiation fund.

The young man disclosed that he told the SARS officers he could not afford it but suggested that he should return the phone to the buyer in order to collect the same amount he bought the phone.

The victim of SARS harassment further disclosed that the SARS officers agreed he should return the phone and he was allegedly locked up in the police cell for the night in A’ division in suleja.

According to him, he was released the following day by the SARS officers so that he could contact the store where he bought the phone to return the phone and get back his money.

“A few minutes later my parents informed the SARS officers that they were coming with a lawyer and they should sell my phone. The officers panicked and were all trying to avoid involving a lawyer. When the lawyer arrived the officers pleaded and I was released before noon, he said.

He stressed that at the early hours of this morning at about 1am, a couple of armed men came to his house and were trying to arrest him. They didn’t claim to be SARS officers all they said was that they were from Abuja with no ID card or arrest warrant insisting that he must be arrested.

They broke the door and started beating up my entire family when my parents refused, he said.

I refused to go with they them so it ended in ally of beating and they handcuffed one of my hands and I refused letting them handcuff both hands. It was a horrifying experience. We called the police station and the SARS officers from the previous setup came and identified those men as officer but they didn’t say if they were from the police or SARS or any other paramilitary. I managed to escape with one of the handcuff. They all left around 4am, he added.