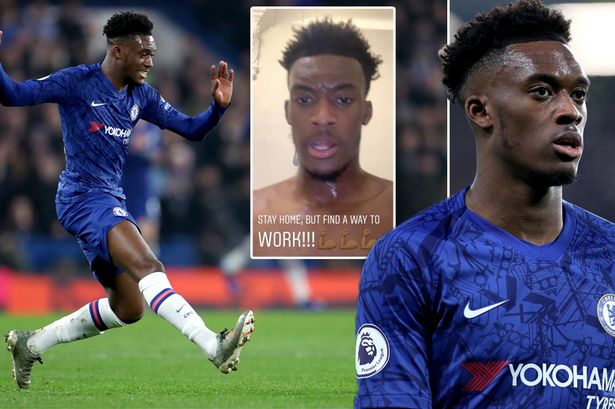 Chelsea Player, Callum Hudson-Odoi was arrested today while flouting lockdown at 4 am with a ‘glamorous’ model he had met online.

Police Officers had gone to the house of the Chelsea star after a woman called the police and an ambulance.

Hudson-Odoi, who once tested positive to coronavirus has asked the model who he met online to visit him in lingerie.

The Sun reported that prior to him inviting her to his West London penthouse, the 19-year-old ‘world-class’ player contacted the model on social media on Saturday.

Hudson-Odoi and the model reportedly exchanged flirty messages that hinted at having “fun” together.

The model showed him some photographs of herself in sexually seductive outfits.

Hudson reportedly sent a car to bring her to the capital to his West London home. However, the woman later called for the police.

According to The Sun, a neighbour of Hudson-Odoi’s said the model “looked very glamorous, like the sort of girl you’d see on Love Island.

“She had very posh Louis Vuitton luggage with her.”

Another resident said: “There have been a few gatherings happening but we didn’t know quite who was responsible.

Paramedics came early yesterday together with the police officers who arrested the footballer.

In any case, the model was taken to hospital after complaining of feeling unwell.

Some Policemen were later seen at the building interviewing concierge staff. Also, another five officers came at around 2.30 pm; obviously, on a search operation.

The Metropolitan Police said: “Police and London Ambulance Service were called at 03.53hrs on Sunday 17 May to a report of an unwell woman.”

“A woman was taken to hospital and a man, who was arrested at the scene, remained in police custody.

OAP Freeze reacts to being tagged ‘The Devil’s…