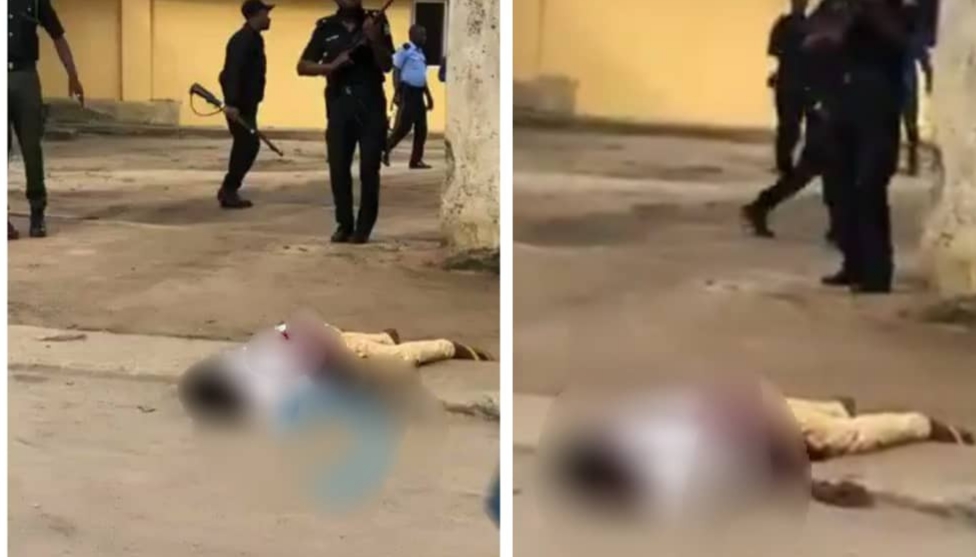 Police men have been accused by a resident of Delta state via his Twitter account on Wednesday that they killed a yet-to-be identified man in Jesse community.

Sharing a video of the young man lying lifeless in front of a police station in Jesse community, the Twitter user disclosed that the man was shot  inside police station.

”Police shot this boy inside police station in jesse town near sapele, leaving him to die. I recorded this about 30 mins ago and it happened before I arrived. This is getting out of hand”  he tweeted.

Police shot this boy inside police station in jesse town near sapele, leaving him to die. I recorded this about 30 mins ago and it happened before I arrived. This is getting out of hand

Reacting to the incident, the Police Public Relations Officer, DSP Onome Onovwakpoyeya confirmed the incident but she however gave a different version of what transpired.

According to Onovwakpoyeya, a group of men stormed the police station in the community at about 7am today with the intention to free an armed robbery suspect. She said they came wielding machetes and other dangerous weapons, and it was in the process of resisting their attack that  the two men were shot dead.

”Those young men attacked the police station. They came in with machetes and axes to free armed robbery suspects that were in the cell. They even injured one of our officers on his eyes. They had even succeeded in opening the cell and some of them were already coming out and that is why they were gunned down.

Two of them were shot down.” she said

The spokesperson added that the armed robbery suspects have been rearrested and transferred to the police headquarters in Asaba, the state capital while an investigation into the attack is ongoing.