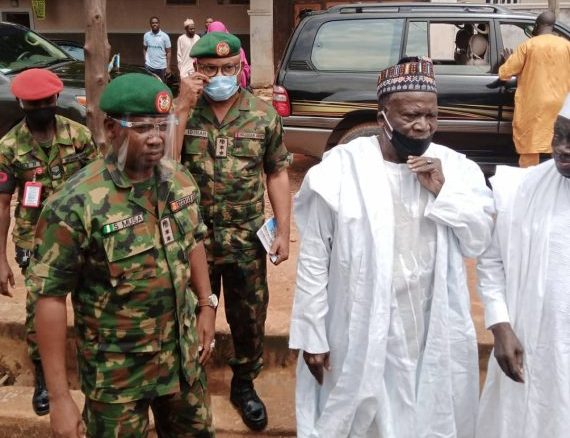 The Biu Community in Kaduna State has commended the Nigerian Army under the examplary leadership of the Chief of Army Staff, Lieutenant General Tukur Yusufu Buratai for tireless and laudable efforts in ensuring security for Nigeria.

They expressed this on Saturday in Kaduna at a ceremony organised to console him on the death of his mother which occured recently.

Speaking on behalf of the community, Alhaji Bawa Garba (ABG), who is the patron of the association in Kaduna, said that Gen Buratai’s commitment to the peace, security and unity of Nigeria is unprecedented in the annals of Nigerian Army history.

Alhaji ABG said, “It is a big pride to Biu Community, Borno State and Nigeria as a whole to have visionary, selfless and committed leader and chief of Army Staff like Gen TY Buratai especially at the trying period of our country’s existence.,” he said.

Speaking further, he said no Chief of Army Staff in the history of Nigeria has recorded the numerous achievements that General Buratai has so far achieved. For an officer of this sterling qualities, Nigerians should appreciate his examplary efforts in securing Nigeria despite occasional hitches here and there. “The condition he met the Army and the scarce resources at his disposal as well as how he overcome obvious shortcomings without complain deserve our collective commendation not Vilification” he further stated.

“Another success we are particularly proud of is the success behind the establishment of the Nigerian Army University Biu, which without him, it wouldn’t have been possible.” We therefore thank President Muhammadu Buhari for granting the approval for the Army University Biu”.

In his response, General Buratai who was represented by the Acting Director Army Public Relations Colonel Sagir Musa thanked the community for their prayers and condolence message for the death of Gen Buratai’s mother, while assuring that the Nigerian Army is highly resolute and committed to overcome terrorism and other security challenges across the nation.

He commended the Biu Association/Babur Bura in Kaduna State for their unity and commitment to the welfare of their members.

“The community here in Kaduna has a rich history behind it. For almost 100 years, we have a building where our common heritage in the areas of living accommodation and a secretariat are based. Let me state that we have had many illustrious sons and daughters of Biu community in different walks of life, but no one cares to assist in renovating this historical edifice until when we seek for assistance from Gen Buratai which he favorably responded. It is therefore to his credit that part of this building is now renovated. This building is for Biu community and it is meant to ensure anybody from Biu coming to Kaduna without a place to put his head could be accommodated to such a period when he is able to get his own accommodation, Alh ABG stated.

General Buratai further thanks the leaders of the association for their prayers and goodwill for the Nigerian Army and conveyed the readiness of the Army under Lt Gen TY Buratai to overcome the security challenges facing Nigeria. He states that Gen Buratai is a humane, courageous, visionary and firm military leader whose major preoccupation is to see the speedy end of terrorism and other insecurities in Nigeria.