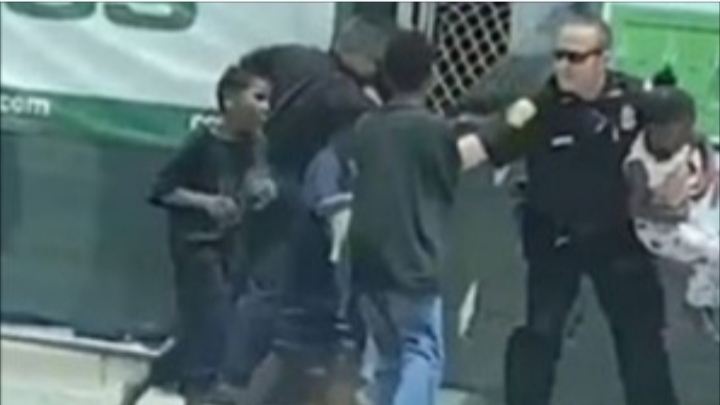 A heartbreaking video of Tampa police separating a woman from her screaming children has surfaced on social media.

WITHIN NIGERIA learnt that Tampa police got a call of a woman ‘under severe mental distress‘ and when the police arrived in the downtown area, they saw the woman walking along the road with her 5 barefoot kids.

The children were ripped off from their mother by the Tampa cops while reacting to the issue.

According to report, the members of the family did not approve of being separated and they cried out and tried to hold onto each other as the police forcibly separated the kids from their mother.

Inside the video which has gone viral, one of the cops can be seen holding the woman against a fence while one of her daughters stands by her side.

Another cop then holds the other girl with one hand as he restrains 3 of her brothers who are trying to free their sister from the officer.

The woman was eventually taken to a hospital for a psychological evaluation by the police and the kids were to the hospital so that they could be near their mom.

The way police handled the situation has raised lots of questions.

Cubana Chief Priest, Sandra Ikeji trade words as he accuses her husband of ‘sipping free drinks’ in his club