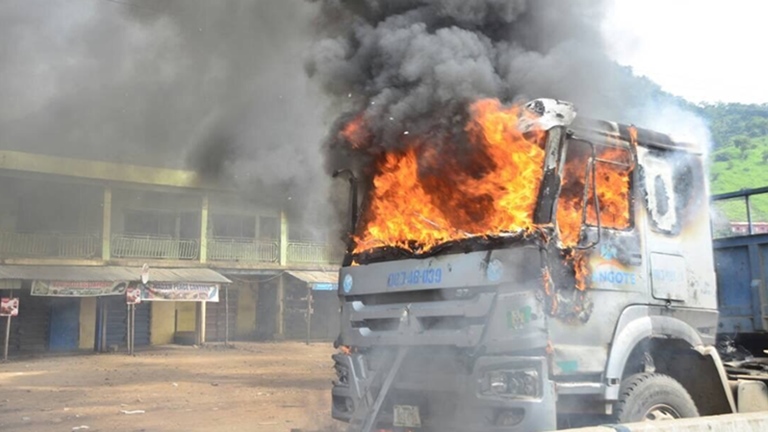 On Saturday an angry mob set fire on a Dangote truck for killing one motorcyclist and injuring three others.

According to reports, the incident happened around 8am on the old Ibadan Roundabout Road, Ago-Iwoye, in the Ijebu-North Local Government Area of Ogun State. The accident involved a Dangote truck and a motorcycle.

The Public Relations Officer of the Traffic Compliance and Enforcement Corps, Babatunde Akinbiyi, confirmed the incident.

Akinbiyi said it occurred as a result of over speeding by the truck driver. He said the truck driver lost control and ran over a moving motorcycle, killing the rider and injuring three others.

In a similar development, a middle-aged man was last year crushed to death by a truck at the Bashorun-Idi Ape junction, Ibadan, Oyo State capital.

Eyewitnesses recount that the man, who was riding a motorcycle, popularly known as Okada, and whose identity is unknown, was heading towards Agodi Gate axis from Iwo road before he met his untimely death.

According to eyewitnesses, two motorcycle riders approaching the junction at top speed had collided behind a truck, which was also going enroute Bashorun from the Agodi Gate axis but had crushed the victim unknowingly as a result of the accident. Read more here.