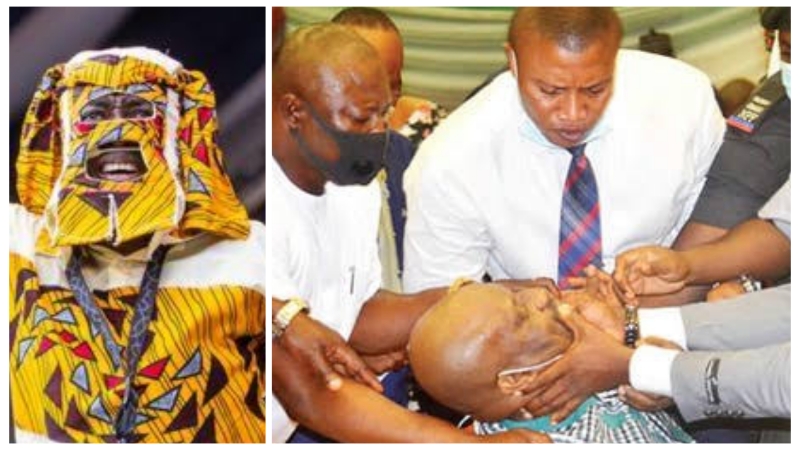 Compassion in looting: Nigeria, nation of ‘many jokes’

Bisade Ologunde popularly is a musician, singer-songwriter and percussionist widely known as Lágbájá for his signature use of mask which covers his identity. He believes in social reform through music. He is not only a great musician whose spirit of activism always reflect in his lyrics but a man who saw tomorrow. When Lágbájá sang this song in 2000, he probably thought he has seen it all during military rule, had high hopes in democracy, appealed to politicians, military men and Nigerians to invest in patience and grow the country to attain enviable heights. It is now 20 years old that Lágbájá sang the song and I am glad to know that he is still alive, hale and hearty to see the ‘enviable heights’ democracy has placed Nigeria as a nation.

Nigeria is a very sad tale of democracy. Massive looting, bloody elections, failing infrastructures, unemployment, poverty, loss of value system and abuse of power are the gains of its 20-year-old democracy. Every individual, agency and political party (the supposed essential institutions of democracy) who took part in its 20-year-old journey of barreness all made life miserable for the people, played a role of greed and turned public offices into private enterprises. They took advantages of the gullibility of the people and extreme poverty index of the country in milking its dry.

Nigeria looters have now introduced a new twist in the scheming. They do not steal alone anymore, they now steal in groups with an agreed proportions. They now give money to support groups mostly youths and women, media houses, social media influencers and engage in philanthropic activities such as boreholes. These beneficiaries who were not part of the active looters will be responsible for profiling of the looters, defense and social media reputation building. They give contracts and slots to traditional rulers among others.

The ‘new twist’ is what I call ‘compassion in looting’. Every looter always has a story to tell. Tales of how they were forced by the system to be corrupt or intimidated by people in power to divert public funds meant for project into private purse. They either collapse or faint, fall terribly sick or seek the permission of the court to travel abroad for medical treatment. Instead of judges to give orders that ex-governors or federal lawmakers should be treated in their state hospitals, the bribe-taking judges would grant the request for medical tourism to frustrate court proceedings.

The practical illustration of ‘compassion in looting’ surfaced during the Niger Delta Development Commission (NDDC) probe at the National assembly. A group of people embezzled funds meant for infrastructures and social development of a region. They did not only embezzle funds but staged a drama to mock the sensibilities of the people. Till now, people of the region especially the young population and traditional rulers have not genuinely stormed the streets and engaged in marathon protests neither did they demand for the prosecution of these looters. They can not protest. They will not protest because they are beneficiaries of the looted funds.

Three days ago, I watched a video of how two petty thieves were beaten to plump and later burnt to ashes by a mob over alleged robbery. This tragic incident happened barely 8 days after acting Managing Director of the Niger Delta Development Commission, Pondei fainted during probe. Pondei confessed to the looting and mismanagement of funds in the commission. Names of lawmakers who lobbied for contracts and were given have surfaced too.

The breakdown of N84billion that was mismanaged by the NDDC has gone viral and these looters still walk around freely in big cars. I am not an advocate of jungle justice but it is my considered opinion that people who looted funds meant for generations are worse than petty thieves and if petty thieves could be subjected to jungle justice, why do these looters still roam the street in garments of honor? It is quite alarming and very unfortunate that people who will set ablaze petty thieves also praise and sing lullabies for looters.

We have two classes of corrupt people in Nigeria. The politicians/government officials and the people. Nigeria is a complete joke. Our politicians are the unrelenting producers of tragicomedy movies and Nigerians are the elements.

I leave you all with these two great quotes:

“When plunder becomes a way of life for a group of men in a society, over the course of time they create for themselves a legal system that authorizes it and a moral code that glorifies it” – Frederic Bastiat