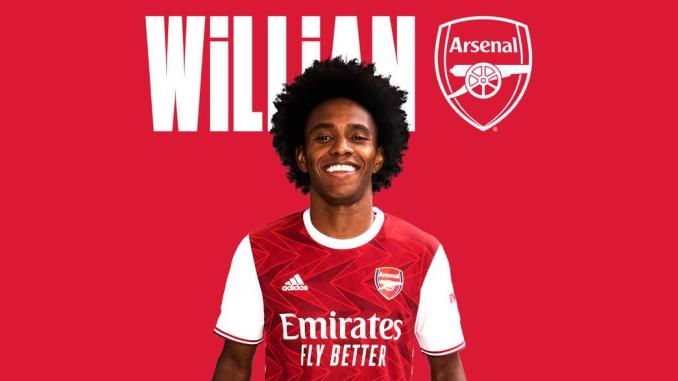 Former Chelsea winger Willian has completed his move to Arsenal.

According to ESPN, the Brazilian has signed a 3-year deal worth £100k-a-week. Willian will wear the number 12 shirt at Arsenal.

Confirming the development the EPL club took to Twitter to welcome the new star, see below:

Prior to joining Arsenal, the 32-year-old spent 7 years with Chelsea, winning two Premier League titles, an FA Cup and the Europa League.

The winger made over 300 appearances managing 63 goals and 56 assists in that time. Willian has also featured in 70 games for Brazil scoring nine goals.

In another news, Paris Saint-Germain are reportedly lining up a shock move for Manchester United’s on-loan star Odion Ighalo.

The 31-year-old striker has caught the eye during his loan spell at United from Shanghai Shenhua, scoring five times for the club.

The Nigerian signed a deal to stay at United until January but PSG are considering him as an option as they look to replace Edinson Cavani.