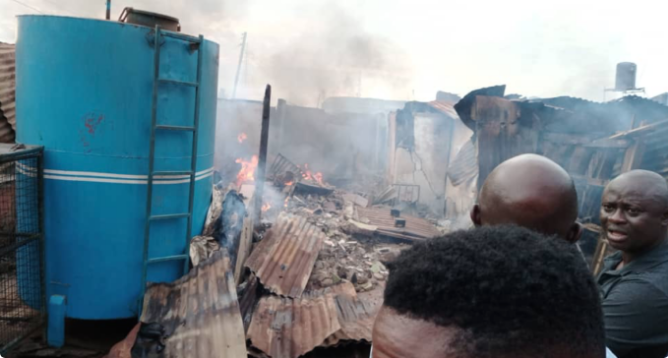 In the early hours of Thursday, October 8, a gas explosion rocked the Baruwa area of Ipaja in Lagos state, Within Nigeria reports.

Taking to its official Twitter handle, the Lagos State Emergency Management Agency confirmed the development. Saying that its emergency response has been activated.

He said though the cause of the explosion is yet to be ascertained, four persons died while several others were injured.

Okunbor said various agencies have been deployed at the scene of the inferno to prevent a further spread of the fire.

“On arrival at the scene of incident it was observed that there was a gas explosion at the aforementioned location,” he said.

“Further investigation at the scene revealed that the gas station belonging to Best Roof Cooking Gas exploded by burning buildings around. The cause of the explosion could not be ascertained at the moment.

“Unfortunately, Four mortalities were recorded and several others injured. A combined effort of the Agency’s Tiger team, Dolphin team, LRU Fire, LASG Fire Service, NPF, NUPENG, and LNSC are on ground to curtail the spread of the fire to other buildings.”

See video from the scene below;

Within Nigeria recalls that on September 24, a gas explosion rocked the Ifako-Ijaiye area of Lagos, leaving 16 persons injured and properties destroyed.