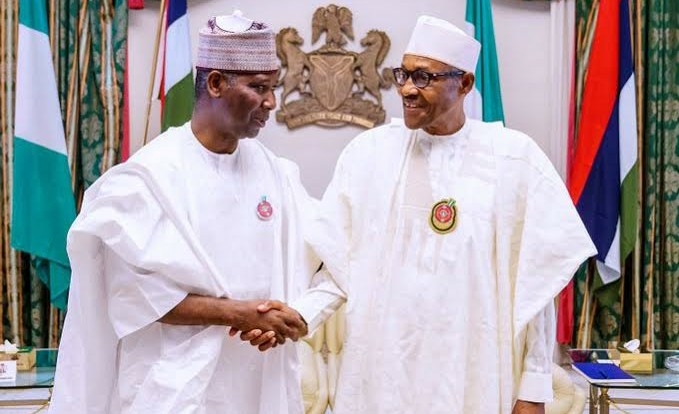 President Muhammadu Buhari has met behind closed door with the immediate past President of the 74th Session of the United Nations General (UNGA74) 2019-2020, Prof. Tijjani Muhammad-Bande, at the Presidential Villa, Abuja.

The News Agency of Nigeria (NAN) reports that the agenda between the president and the Nigeria’s Permanent Representative to the United Nations in New York, was unknown to State House correspondents as at the time of filing this report.

However, NAN gathered that Muhammad-Bande, who successfully completed his tenure as the President of the UNGA74 in September, was in the villa to thank the president for his support throughout his tenure.

Buhari had in a statement by his spokesman, Malam Garba Shehu, on Sept. 28, congratulated Muhammad-Bande for the successful tenure as president of the UNGA74.

The president, who described his tenure as “triumphant,” said:

“Your performance in the last one year as President of the General Assembly has made Nigeria exceptionally proud, and I wish to pay glowing tributes to you for your huge achievements as Permanent Representative of Nigeria to the United Nations (UN).

“By this stellar performance, you have made history for Nigeria and indeed for the whole of Africa.”

Buhari also noted that the Permanent Representative “played a cardinal role by giving impetus to a number of UN global initiatives, one of which is advancing the achievement of the Sustainable Development Goals (SDGs) particularly in poverty eradication, zero hunger and quality education”.

NAN reports that Muhammed-Bande, later, joined the president to perform the two-raka’at Friday prayer at the Aso Villa Mosque.