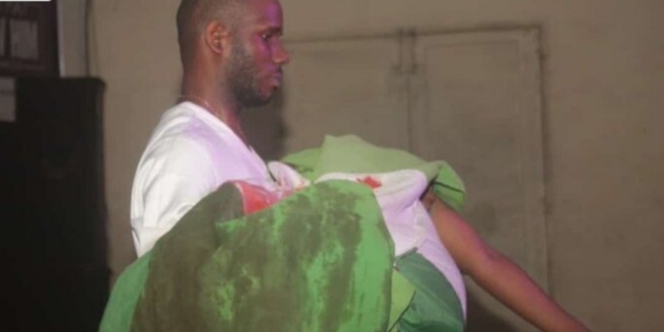 FAKE NEWS ALERT: This photo is from a drama on Nigeria’s 60th independence NOT Lekki shooting

Have you also seen a photo of a man carrying a lady clad in blood-stained flag? This photo has gone viral on social media platforms, depicting as an #EndSARS protester shot by soldiers in Lekki shooting.

Recall that on Tuesday, men in army uniform opened fire on unarmed protesters at Lekki toll gate in Lagos state.

This tragic and ugly incident had generated an uproar within and outside the country.

A Nigerian singer, Yemi Alade who has more than 12 million followers on Instagram earlier shared the photo but later deleted it.

The photo was also shared by other Nigerians as condemnations continue to trail the shooting of the unarmed protesters by the soldiers.

Many Nigerians on social media users claimed that the lady in the photo died after she was shot. Is this claim true or false?

Findings revealed that the photo is from a drama staged by the Akwa Ibom state chapter of the Nigeria Christian Corpers Fellowship (NCCF).

The drama, titled: “Lord, Heal Our Land”, was in commemoration of Nigeria’s 60th independence anniversary held on October 1.

You can watch the drama here.

Reacting to the development, the NCCF dismissed the claim that the lady in the photo had died.

“This is to inform the general public that the picture trending online of a man carrying a lady covered in Nigerian flag appearing dead is a picture from the NCCF Akwa Ibom state, stage drama night tagged “Lord, heal our land” on October 1, 2020 at the NCCF state secretariat,” the statement read.

“The lady in question is alive. We are standing with the youth on the #EndSARS and the #EndPoliceBrutality peaceful protest. We call for a new Nigeria where peace, righteousness an justice reigns.”

The #EndSARS protest, which started on a peaceful note, took a violent turn earlier in the week.

FAKE NEWS ALERT: This protest video is from South Africa — NOT Tinubu’s house

Okonjo-Iweala is yet to be officially announced as WTO DG