Nigerian comedian, Bovi, has reacted to the video of Kogi State Commissioner for Health, Saka Audu crying during an inspection of vandalized medical equipment in the state.

Audu, while addressing the press on Thursday, wept over the destruction of medical equipment worth billions of Naira.

The commissioner, who disclosed that the Bello-led state government does not have the funds for repairs or replacement, said that the they lost the entire medical store to looters.

“We lost the entire contents of Kogi State medical store.

“Equipment worth billions of naira were stolen. Those that couldn’t be stolen, like the walk-in refrigerator for immunization, where our vaccines are stored, components of our MRI and CT scan were vandalized beyond repair. Others were moved from the store and broke into pieces in nearby bushes.

“It is indeed a very unfortunate development that the state will find it difficult to recover from as we don’t have the capacity to provide what have carted away or vandalized in a short time,” Audu said.

Kogi people have come again with another drama. This competes well with Dino Melaye’s many theatrics.

Reacting to the video, Bovi who felt that his comic job was being threatened, decided to jokingly quit.

“I quit comedy,” he tweeted.

When fans said Nigerian politicians are downplaying his talent and have benched him on the comedy club, Bovi agreed saying; “I no even Dey make team list again”

The comedian also retweeted posts of his followers’ reaction to the event. 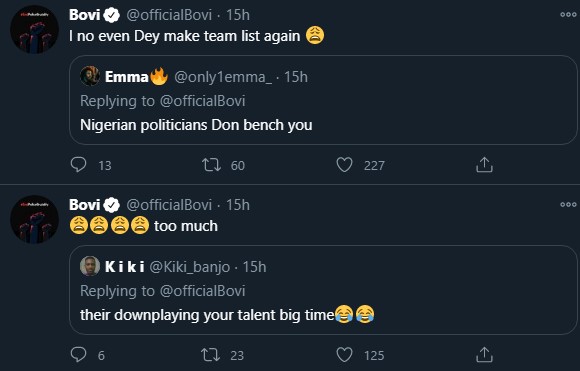 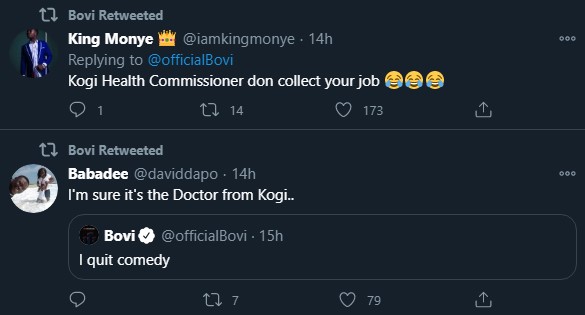