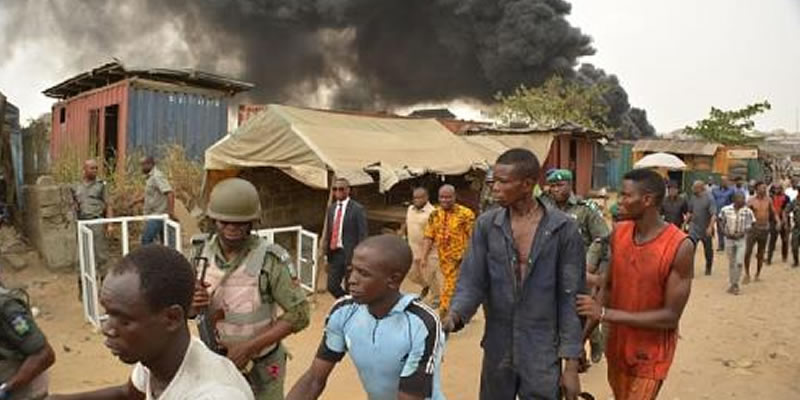 Oyigbo Killings: I did not order soldiers to shoot residents, Wike declares

The Executive Governor of Rivers state, Nyesom Wike has stated that he did not order the military to kill residents of Oyigbo local government area of the state.

Recall that Nyesom Wike declared a 24-hour curfew in Oyigbo on October 21 following the outbreak of violence spilling from the EndSARS protest which led to the killing of some members of the army and the police.

This is coming days after the governor, Wike blamed the unrest on members of the proscribed Indigenous People of Biafra (IPOB).

Wike signed an executive order to enforce the ban on the group and its activities in the state.

Soldiers were deployed in the local government to prevent further breakdown of law and order.

The soldiers have, however, been accused of extra-judicial killings and abuse of human rights. The security agents are allegedly moving from house to house, killing people on Wike’s order.

While speaking during an interview on Africa Independent Television (AIT) on Monday, Wike denied the allegation against him.

He said he ordered “security agencies”, not specifically the army, to bring to justice any member of the group that disrupts the peace in the state.

“The issue of people saying I sent soldiers to Oyingo to kill Igbo people is balderdash; It is completely a none issue. Have I even directed police one day? I have no command over the police so how will I now begin to direct the army?” Wike said.

“I said security agencies, I never said the military, are to make sure this ban on IPOB is maintained and that they should not allow the activities of IPOB, anywhere in any of the local governments. Oyigbo is the boundary between us and Abia state, so it is very easy for them to use Oyigbo to launch attacks, and we came out to say that what has happened is something that we should not take lightly; we must come out openly, heavily against this terrorist organisation. I have no regret about that and I stand on my point to say that even the south-east governors never supported IPOB. So why me? I’m not from the south-east, I’m from Niger Delta, now support IPOB? On what basis?

“People are now seeing IPOB as if it is the mouthpiece of the Igbo people which is not correct. You cannot allow some bands of criminals to give the people a bad name. No responsible government can see the kind of destruction, for nothing …they went to kill six army operatives, four police officers…. They’re using it to cause trouble in my state and you say I should not talk. It came to a situation where the Igbos were now fighting the Hausas.”

Wike alleged that Rotimi Amaechi, minister of transportation, told the people of the state to rise up against him.

“He thinks I’m harassing him politically, so he is doing that to bring me down,” he said.