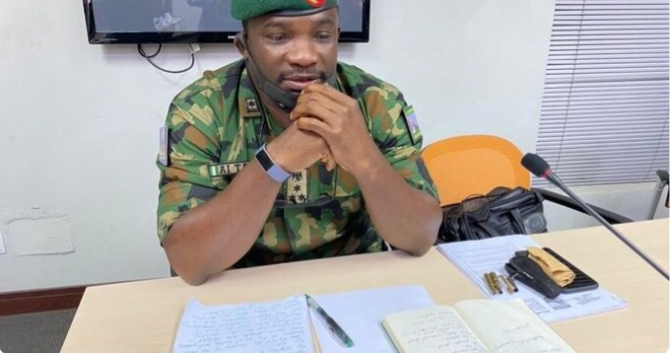 Commander of the 81 division of the Nigerian Army, Ibrahim Taiwo has stated that Lagos governor, Babajide Sanwo-Olu did the right thing by inviting soldiers to restore order during the #EndSARS protest in the state.

Taiwo while addressing the judicial panel set up by the state on Saturday said the soldiers were deployed immediately the governor invited them.

The brigadier-general said the soldiers were pelted with stones and bottles, yet they were able to stop a popular hotel beside the toll get from being set on fire.

“The world over, it is the custom that the army intervenes when a situation overcomes the police and paramilitary services. The occurrences that took place from October 18 were nothing short of lawlessness and violence,” Taiwo said.

“It was these incidents that made the Governor of Lagos State ask for military intervention and in my opinion, that was the correct thing to do since the police had been overrun and policemen were fighting for their dear lives.

“Contrary to what is out there, it was done throughout Lagos State upon receipt of Stage 4 of IS Security. Phase 4 is immediate deployment of soldiers outside the barracks to intervene.

“Troops were deployed from Badagry, Ikorodu, Epe, Apapa, Ikeja, Alimosho and even Lagos Island to restore order. The rules of engagement for internal security were strictly followed. It is inexcusable for troops to stand aside and watch the situation deteriorate.”