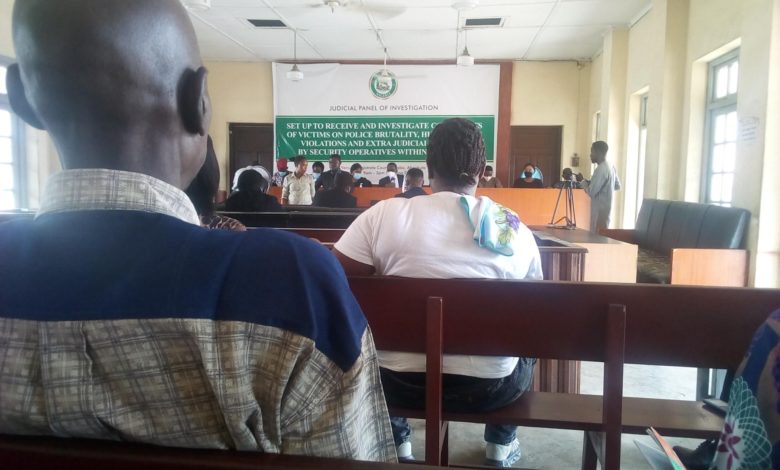 On Wednesday, November 18, during the #EndSARS judicial panel in Ogun, a taxi driver identified as Mayowa Ayodele alleged that he was detained for seven months and 16 days by the police for asking policemen who had chartered his vehicle to pay for their fare.

Ayodele made the allegation before the Ogun State Judicial Panel of Investigation, set up by the State Government to investigate complaints of victims of brutality and human right violations by security operatives.

The middle-aged man who worked as a taxi driver in the Shagamu area of the state narrated that his vehicle was chartered on March 7, 2018, by four men putting on police uniform who he alleged locked him up for demanding money after the ride.

“I took them from the Mowe area to Magboro and back to Shagamu. After the ride, I requested my money, which was N4500, but they refused to pay me. They said they were working for the government,” Ayodele told the panel.

“Their Superior ordered them to lock me up”

Ayodele said his vehicle was seized while he was locked up in a cell at the Motor Traffic Division of the Police in Shagamu, where he spent 16 days.

Afterwards, he was charged for pipeline vandalism at the Federal High Court in Oke Mosan, Abeokuta.

While the trial was on, he was remanded at the Oba prison, located in the state capital, Abeokuta, where he spent seven months.

His counsel, Kayode Aderemi said his client was charged along with eight others for pipeline vandalism, but the case was eventually dismissed after seven months of the trial on the strength of “No case”

“All nine of them were later acquitted,” Aderemi said.

After his acquittal, the victim made efforts to recover his vehicle but he suffered more harassment.

“When I got back to collect my car, I met another boss there at the Motor Traffic Division. He said I had the effrontery to come ask for my car, and he ordered them to lock me up again. I spent another four days there before my lawyer came to bail me.”

He said he purchased the vehicle in instalment for a sum of N1,050,000 which he has not finished paying.

Ayodele said he has been jobless since he returned from prison and prayed that the government help him recover his vehicle.

“I want my vehicle back because that is what I use to feed my family. My wife has left me because I don’t have a job.”

The respondents to the petition are Buhari Yusuf, DSP, Ehimere Anthony, a police Sergeant and Kunle, an Inspector. All three did not appear before the panel.

Justice Solomon Olugbemi (rtd), Chairman of the panel, asked the victim to return on November 30.