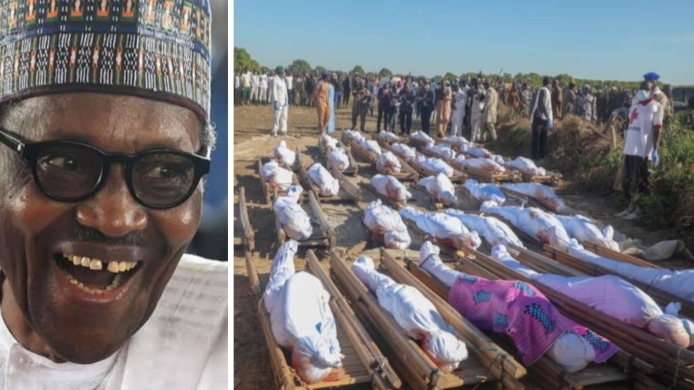 On Saturday, I read the most shocking and heart-wrenching story I have ever come across this year, the Zabarmari’s massacre. More than 60 hardworking rice farmers who left their homes to harvest rice grains were attacked by Boko Haram insurgents and at least 45 of them were reportedly slaughtered like rams at Garin Kwashebe.

In nations where lives of ordinary citizens are valued and priceless, all flags will be lowered and flown at half-staff upon the demise of hardworking rice farmers who were brutally killed and there will be progressive actions. But Nigeria is a very sad nation where lives of ordinary citizens mean nothing to their leaders. So, there will be no lowering of flags and progressive actions.

Over the years, the failure of Nigerian government to provide workable solutions in resolving rampant, grave and unending security challenges has made some parts of the country hellish as insurgency has not only thrived successfully in these parts but insurgents now have capacity to carry out deadly operations at will.

Nigerians have become so used to tragic ocurrence that when it happens, they only react and continue with their daily businesses.

But the recent ones such as the killing of Nasarawa APC chairman, slaughtering of rice farmers should send a message to everyone that Nigeria is under attack and the security architecture of the country is not only porous but it has been hijacked.

President Muhammadu Buhari has spent five years in office. He ran his campaigns majorly on three things namely; security, anti-corruption and fixing of the economy.

During campaigns, Buhari tackled his predecessor, Jonathan on insecurity and vowed to bring an end to this menace.

Being a former head of state and trained military officer, people thought Buhari would have better ideas to fight Boko Haram or as an experienced top military officer, he would introduced new strategies to tackle the menace but all his decisions so far in office on security challenges have made things worse.

We now have more than Boko Haram insurgency to fight as bandits, kidnappers, aggrieved IPOB and IMN members have joined the list of groups/people threatening the peace of the country. Buhari is no doubt a diety who could not save the nation yet could not return it back to its initial state.

When tragic incidents occur, quality responsive actions must be taken both in words and acts. Recent developments have shown that president Buhari lacks both.

He is always shocked by tragedies, ignorant of controversial policies, bereft of ideas and intellectual approach to address them.

Sometimes I go biblical and conclude that Buhari is probably a satanic whip God deliberately appointed to punish Nigerians over iniquities but a background check of his profile showed that Buhari has always been a clog in the wheels of genuine leadership and service delivery.

Unfortunately, Nigeria has a titular head who is ignorant of happenstances within his immediate environment not to talk of generality of Nigerians.

When Zabarmari’s massacre occurred, I was expecting a slight change in Buhari’s response and truly, there was a change. He dropped the word ‘shocked’, picked hurt and consoled the relatives of the slaughtered Nigerians.

A lot of prominent Nigerians including the Nigeria Senate under the leadership of Senator Ahmad Lawan who shares membership of same party with the president have called for the sack of service chiefs. They described these service chiefs as incompetent due to their inability to reduce the attacks or address security challenges battling with the nation.

Despite calls for the sack of service chiefs, President Buhari did not heed to advice and those who appear to be remote controls of this presidency have failed to make him see reasons.

Experts have called for change in security infrastructure of the nation and several prominent Nigerians have supported this call. A wise coach will not continue to use players who can not win match.

Yes, Buhari is lazy to think, reflect and adjust. Sadly, those who are supposed to help him to be better in thought are busy using his deficiencies to promote their political agendas. They do not care if Nigeria is in ruins or Buhari does not end well.

As far as Nigeria is not in complete ruins and elections will be possible, they really don’t care if he succeed or not. Both the party, inner caucus and ‘presidential boys’ have abandoned their demi-god and it appears that they seem unconcerned and unbothered with his reputation and profile.

I think Buhari needs to sit down with Jonathan and learn about post-presidency experience from him. Boko Haram insurgents invaded Chibok school and took over some local government during Jonathan’s tenure. Jonathan was the president under PDP as a political party.

Now that he’s no more the president, he not the party, close aides and ASO-AROCK boys bears the larger blames of Chibok’s incident because it happened during his tenure.

Out of 36 states, there is no state without security challenges. Borno is taking the lead now. Nasarawa APC chairman never imagined that he could be abducted and killed.

Just like hardworking rice farmers who were slaughtered like rams never believed that gunmen suspected to be Boko Haram could come to their rice field. There is a silent message of warning that the attack is gradual and the devils are not tired.

There is no better time to sit President Buhari or those in control of presidency down than now. Like I said, it is gradual and you do not know if you are the next or not. What I surely know is if these issues are not properly addressed, we all will become casualties.

I just pray that the creators of Borno’s valley of death will not extend their valleys across the nation because the sleeping Buhari will be woken up.