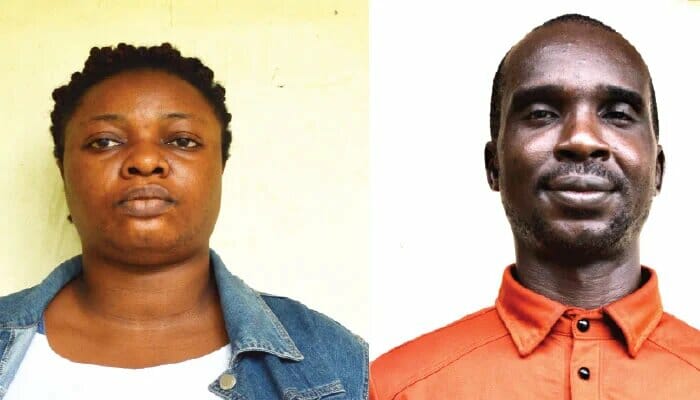 How promoters defrauded tourists of N4m in Canadian visa scam

The Economic and Financial Crimes Commission, EFCC, has arraigned two promoters of the Victoria Travels Resorts Limited, Mary Aweh and Olaleye Oluwadamilare, before the Kaduna State High Court over a Canadian visa scam.

It was gathered that the two defendants obtained a total sum of N4,240,000 from two persons, Asika Casmir and Daniel Monday, under the pretext of obtaining Canadian visas for them.

The Head of Media and Publicity, EFCC, Wilson Uwujaren, who disclosed this in a statement on Monday, said the complainants engaged the defendants in 2018 to arrange a trip to the Turks and Caicos Islands and paid N1m each.

Uwujaren stated that two days to their departure, Aweh allegedly informed them that the trip had been put on hold and offered them Canadian visas as an alternative.

The complainants reportedly accepted the offer and paid N4,240,000 each for the visas, consultancy and air tickets.

“After a long wait, Olaleye called and delivered the so-called Canadian visas and Yellow Fever cards. He also informed them that they would be travelling through Kenya. But upon arrival in Nairobi, Asika and Alabi were arrested by Kenyan immigration officials for possession of fake Yellow Fever cards and detained.

“Upon their release, the duo made effort to contact the suspect to get her Kenyan representative to assist with the connecting flight to Canada, but her phone lines were off. The complainants were re-arrested by Kenyan immigration and deported to Nigeria,” Uwujaren said.

The EFCC spokesperson added that upon landing in Nigeria, the complainants reported at the EFCC and the defendants were arrested.

The defendants pleaded not guilty to the six counts charges bordering on advance fee fraud levelled against them.

Justice M.T. Tukur granted bail to the defendants in the sum of N2m each and a surety in like sum, adding that the sureties must be of good character and possess evidence of tax payment for the past three years.

He also ordered that they be remanded in a custodial centre pending the perfection of their bail terms.