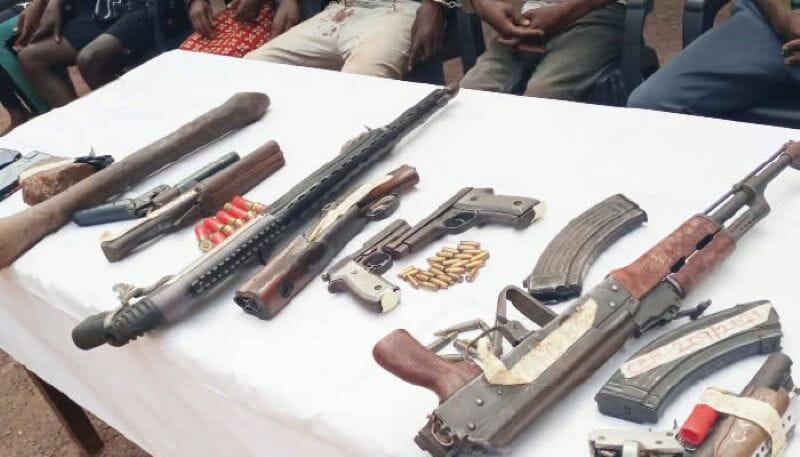 Eleven criminal suspects have been arrested by the police for different offences, including murder, kidnapping, child trafficking, armed robbery and stealing in Enugu State.

The State Commissioner of Police, Mr Abubakar Lawal, who disclosed this while parading the suspects on Thursday at the state police headquarters, told journalists that they were arrested within the month.

Among the 11 suspects were Odoh Tochukwu, Ifenyinwa Okonkwo and Ogbodo Emmanuel, who were alleged to be fraudsters who specialised in stealing vehicles from car dealers with fake bank alerts.

According to the commissioner, the suspects were arrested at different locations between December 7 and 13, 2021, by police detectives attached to the Anti-Robbery Section of the State Criminal Investigation Department following intelligence on their criminal activities.

He said, “Preliminary investigation showed that the criminal syndicate specialised in stealing cars by fraudulently sending fake credit alerts to unsuspecting car dealers, as payment for the purchase of cars and other items within Enugu and other parts of the country.

“Six vehicles of different makes and other incriminating items were recovered from them, while further discreet investigation to arrest other members of the criminal gang at large is ongoing.”

Also paraded were Chioma Nwatu, aka Chioma-Gbashi; Chikwube Nwatu, aka Cheche; and Uwa Emeka, aka Akimbo, arrested on December 22, 2021 by operatives of the CP Monitoring Unit for alleged conspiracy and kidnapping.

CP Lawal said their arrest was sequel to intelligence-led operations from a report that the trio and others at large, conspired and kidnapped one Amechi Oguama on October 20, 2021.

The gang was said to have demanded and received a ransom of about N10m from the victim’s family, but failed to produce him.

“Preliminary investigation revealed that the suspects, who confessed to the crime, invited the victim to Enugu from his base in Lagos, to finalise a child adoption deal, after obtaining the total sum of N3,762,500 as payment for the adoption a twin,” he added.

The police boss said while the command was working to rescue the victim and apprehend other members of the gang at large, a Mercedes Benz 4matic belonging to the victim and in which he was abducted on the said date, had been recovered.