According to the reports by Facebook user, Henshaw Nyong, the incident happened at their home in Mbiabam Ibiono today Monday, 12th February 2018.

The suspect has been arrested by the police and investigations are ongoing. See the graphic photo below 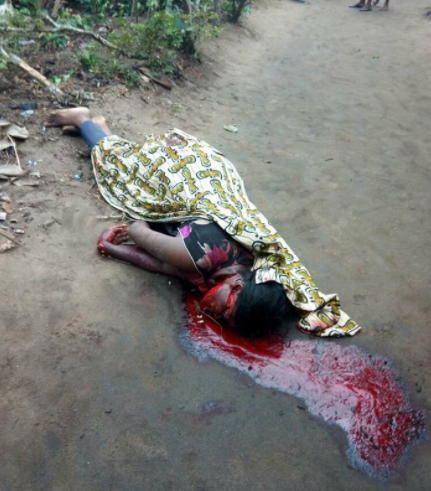 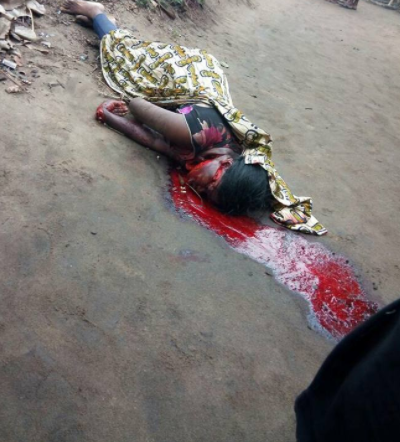 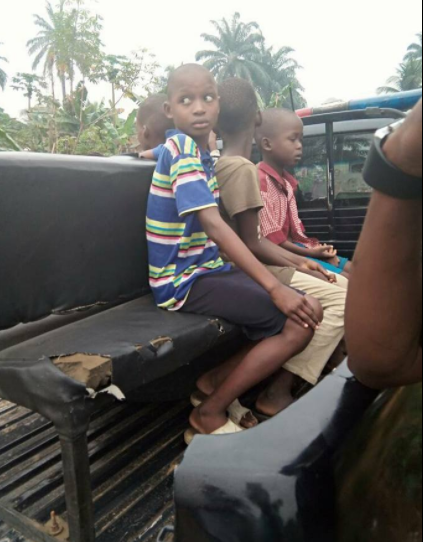 It was learnt that Bella, who was in her early 30s, had five children for the man. The woman was left in a pool of blood.

She lay face down, with blood gushing out of her head.

Her face, neck and the entire head region were severely hacked open with what is likely to be a very sharp object.

Her left arm appears to have been cut off, and lies in an awkward position underneath her body and flung right beside the right arm.

Clothed in a pair of jeans trousers and a flower-patterned blouse and a wrapper, Bella’s eyes were not spared, as she had an open gash across where her eyes had been, indicating that she had most probably suffered deep cuts across the face also.

A source told our correspondent that the suspected wife killer had been diagnosed with mental illness but was said to have recovered.

Another source said the late Bella was a very beautiful woman, and with low financial status of the husband, he was always feeling insecure.

It was gathered that Nkere, after killing his wife, blocked the entrance to his home and threatened to kill anybody who dared question his action until he was overpowered by the Police.

Nkere and Bella were said to have attended church together on Sunday along with their five children.

It was gathered that the late Bella was a hard-working petty trader and well-loved in the community.

The state Police Public Relations Officer, Odiko McDon, confirmed the incident but said the suspect has been arrested by Itam Division of the state command.

On the motive behind the murder, Odiko replied via WhatsApp: “Investigation is in progress, you will be communicated to, please.”

READ: Fatal accident claims the life of an Anglican priest in Anambra

Fatal accident claims the life of an Anglican priest in Anambra