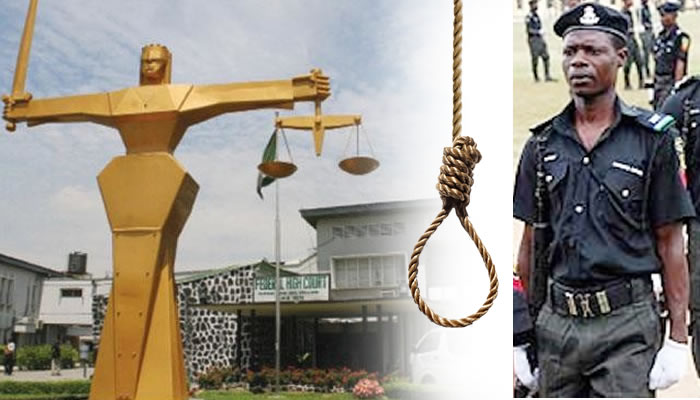 Police Sergeant sentenced to death by hanging in Bayelsa

A Bayelsa State High Court sitting in Yenagoa has sentenced a policeman, Sgt. Jilla Lannubo, to death by hanging.

The convicted cop was arraigned for the extrajudicial killing of one Oruyegha Grand, in the Agudama area of Yenagoa on May 13, 2017.

Lannubo, a native of Bokos community, in the Bokos Local Government Area of Plateau State, was attached to Mobile Police Unit 30, Bayelsa Command, and was deployed in the Akenfa Police Station for patrol duties before the incident.

The State Special Prosecutor, Arthur Seweniowor, had charged Lannubo with murder in contravention of Section 247 (1) of the Criminal Code Law, Cap C14 Laws of Bayelsa State, 2006.

Lannubo, who admitted shooting Grand, however, claimed he did so in line with his duty to prevent the deceased from evading arrest.

The prosecution had called 15 witnesses, including the deceased’s wife and brother.

Seweniowor said, “My lord, the prosecution has placed before the court sufficient facts to sustain a conviction and as a court of law.”

Justice Ineikade Eradiri, in his ruling, said the prosecution had proved the murder charge against Lannubo beyond reasonable doubt and sentenced him (Lannubo) to death by hanging.