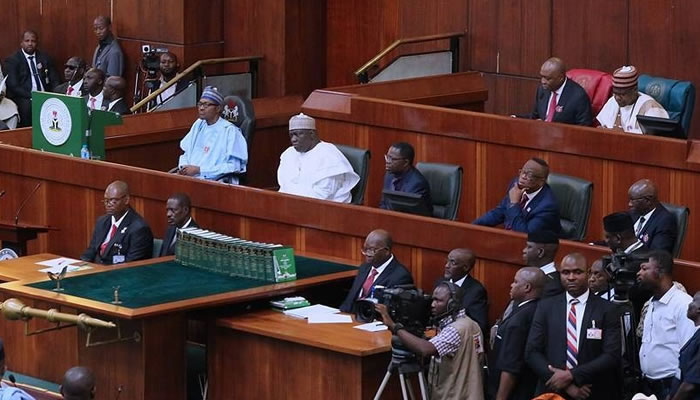 The original estimates presented to the legislature on November 7, 2017 by President Muhammadu Buhari totalled N8.612tn.

The new budget size was contained in the report of the joint Senate and House of Representatives Committee on Appropriation laid before lawmakers in Abuja on Tuesday.

The crude oil benchmark price of the budget was also increased from $45 to $50.5.

The benchmark alteration confirmed an exclusive story by The PUNCH on May 1, 2018 that lawmakers had proposed to increase the benchmark because of the steady rise in the global price of crude.

From about $50 per barrel in November 2017 when Buhari laid the budget estimates, lawmakers noted that the crude oil price had jumped to around $80.

SERAP, 302 Nigerians drag Buhari, Osinbajo, others to court over…

At the House of Representatives, the Chairman, Committee on Appropriation, Mr. Mustapha Bala-Dawaki, presented the report to the House session, which was presided over by the Deputy Speaker, Mr. Yussuff Lasun, on Tuesday.

Lasun announced that the budget would be passed today (Wednesday).

He asked members to pick copies of the report as early as 8am and read it, preparatory to the consideration and passage of the budget.

“Get your copies as from 8am so that by afternoon, we will begin to pass the budget. This announcement is very important, because we will adjourn the House on Thursday to go for the APC congresses”, the deputy speaker informed his colleagues.

There are other changes to the original document as contained in the National Assembly report, different from Buhari’s proposals.

In the President’s estimates, the recurrent expenditure was captured as N3.494tn. But in the new report, it was raised to N3.516tn.

Similarly, the development fund for capital expenditure was raised to N2.869tn from the N2.652tn proposed by the President on November 7.

The provision for statutory transfers also rose to N530.421bn from N456bn.

Debt servicing provision rose to N2.203tn from N2.014tn. The new figure includes the N190bn for the “Sinking Fund.”

However, the naira/dollar exchange rate was retained at N305 to $1.

Also, the Senate on Tuesday received the report on the 2018 Appropriation Bill from the Committee on Appropriations and might pass the budget today (Wednesday).

The Chairman of the committee, Senator Danjuma Goje, laid the report before the Senate at the plenary on Tuesday.

The Chairman of the Senate Committee on Media and Public Affairs, Senator Aliyu Sabi-Abdullahi, had on different occasions said the budget would be passed after the report was presented.