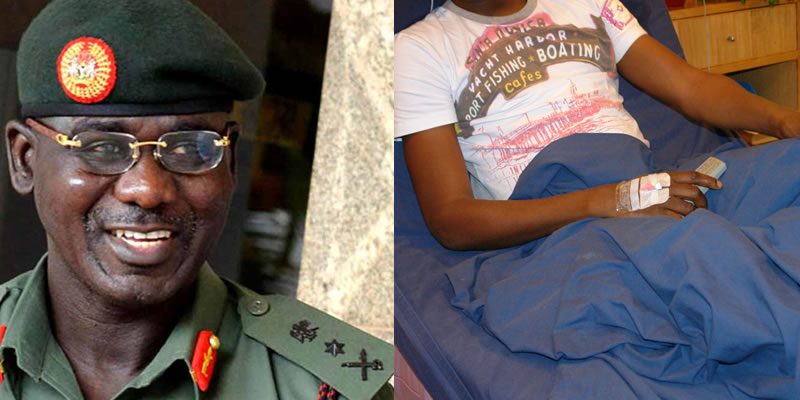 Former resident of Maiduguri, now taking refuge  in Kaduna State as a result of the activities of Boko Haram and public affairs commentator, Idoko Ainoko in this explosive piece writes on how Buratai’s activity of relocating IDPs back to their homes in Nigeria brought about healing in his life.

Here is the full article :

Former resident of Maiduguri, now taking refuge  in Kaduna State as a result of the activities of Boko Haram and public affairs commentator, Idoko Ainoko in this explosive piece writes on how Buratai’s activity of relocating IDPs back to their homes in Nigeria brought about healing in his life.

Here is the full article :

Buratai: Liberated Captives And Loud Songs Of Joy From Northern-Borno

The frequency of good tidings churning out of the Northeast, the former Boko Harm terrorists’ hub and colony these last few weeks and months have elicited tremendous joy in me. From Nigerian troop’s war-war in fierce combats on the battlefield with insurgents, we now hear or read about displaced natives returning back to their ancestral homes in droves jubilantly.

And months and years in IDPs camps have not been pleasant experiences to the over 2 million people displaced by insurgency. Unless we are direct victims, many cannot fully appreciate how life can be cruel to innocent people sometimes.

So, Nigerians are living witnesses to the joy of victims returning home, to pick up pieces of their lives from the scratch and from nothingness or completely ruined homes and villages/communities. It calls for celebrations and toasting of glasses of champagne.

Never before in my entire life, have I experienced a people in such conspiratorial existential predicaments. Yet, they have resolved to rise above personal foibles and circumstances imposed on them by the evil machinations of enemies through insurgency.

I was soberly disarmed by the sheer determination of Boko Haram victims in the Northeast never to be weakened by the horror and trauma of the insurgency crisis. The resolve to forge ahead with life is very strong for whatever holds meaning unto their lives.

I heard the Nigerian Army has restored peace and security in the Northeast. But I preferred not to believe it, until I saw IDPs gladly returning back to abandoned homes. And in the last few weeks   alone, IDPs have kept returning to ancestral abodes because troops of “Operation Last Hold” under the Theatre Command, “Operation Lafiya Dole,” intensified raids on remnants of insurgents’ hideouts in clearance operations.

To tell the rest of us and the world some passionate story, natives of Zari village or the returnees to Mobbar LGA of the state embarked on clearing of ‘kaka’ trees. They felt very free to clear shrubs at their homes on the Damasak-Zari-Gudumbali roads, which insurgents forced them to desert for years.

Quite pathetically, some of them were sighting their forlorn homes for the first time in several years. I doffed my cap for the COAS and leader of the counter-insurgency operations in the country, Lt. Gen. Tukur Yusufu Buratai.  He earned my respect despite negative cacophonic voices in Nigeria against him.

These series of exciting and positive records on the anti-terrorism war under the leadership of President Muhammadu Buhari and the current leadership of the Nigerian Military have attracted endless compliments from me.

But beyond me, it should task our collective spirit of empathy for our fellow brothers and sisters. It ought to leave a void in our hearts, if we fail to at least, step out with a voice in acknowledgment and thankfulness to the victims for their provable abiding faith as stronger than terrorism.

The returning IDPs in villages around Zari in the Northern part of Borno a few days back  completely stole the joy of my heart. In these hapless Nigerian victims of terrorism, I saw the resilient spirit of the average Nigerian. They were not just happy about their liberation, but also paid very touchy homage to Gen. Buratai and his troops who they know have railroaded their liberation from Boko Haram terrorism.

I watched the video on my hospital bed in Amsterdam, the Netherlands. And like the electrifying fire of the Holy Ghost as witnessed in many crusades and around the world, life immediately came back into me and I could walk again. I jumped out on my hospital bed in ecstasy, not minding that I still had an intravenous drip on the ankle of my hand.

Both doctors and nurses on my bedside were quick to caution me. But miraculously, I considered their medication meaningless, because I was instantly healed by the joy of the news.  As a Nigerian, from that part of my country, I have gone through unquantifiable psychological trauma on account of the crisis.

My very own people were affected. I know how much I spent to give them comfort in IDPs camps. But it never gave them the needed relief because a man severed from his natural habitat for years is perpetually a sad man; no matter the extent anyone tries to placate him. I tried my best to give them basic comfort in camps and bridge the gap.

If I do not personally visit once in a while, I would send emissaries with endearing messages. But it never pleased any one of them that they no longer have the freedom to extend hearty affections to loved ones, within the family and around the villages.

Faces of my loved ones assailed me with melancholy and an unexpressed feeling of emptiness. It silently soaked my heart in tears. Their actions once again, pungently and painfully told me, money is not everything to a human being. But freedom and the laxity to savour a life free of inhibitions is priceless.

I saw my surviving siblings, my cousins, nephews, aged aunties and uncles, weeping uncontrollably at my sight each time I visited. Only a man in my kind of predicament would understand how it feels to have such number of dear ones caged for years, but return back to their traditional abodes. My heart leapt defiantly in explosively blitzed joy. I could not remember I was on a sick bed anymore.

I must confess, I lost touch with my readers and fans for upward of two weeks or more. I was on a hospital bed in foreign lands, trying to recuperate from an indiscernible ailment. The doctors didn’t even know what was wrong with me, after several laboratory tests and medical diagnosis. But the return of my people to our communities miraculously healed me.

So, when I opened my mails, it was full to the brim. My fans who read my column on regularly basis continued to bombard my inbox with queries and why I have refused to comment on the news.They accused me of refusing to change my anti-government stance on insecurity, now that the rhythms are positive. They didn’t know, I was too sick to write that time. But now, I have regained my health.

The excitement was complete, when a video of the returnees amid rapturous shouts of joy and incantations, conspicuously displayed this appreciative appellation; “Kudos to Lt. Gen. TY Buratai and Gallant Nigerian Army for Liberating our Local Government, Guzamala Local Govt,” displayed on buses conveying them back to cherished homes.

Oh Gracious God! So, these Nigerians still remember to thank the Nigerian Army? The Biblical lesson of one out of the 10 lepers, healed by Jesus Christ flashed on my mind.

It was just one out of the lepers who came back to give thanks to Almighty God after the healing.   And I was so happy, my people still remembered and acted it. This is what got me extremely excited and became the final healing. I got to return back to Nigeria immediately. All hail Nigerian Army!

Ainoko former  resident of Maiduguri is now based in Kaduna State.

General Buratai and the return of military innovations

Sowore: Before we crucify the secret Police