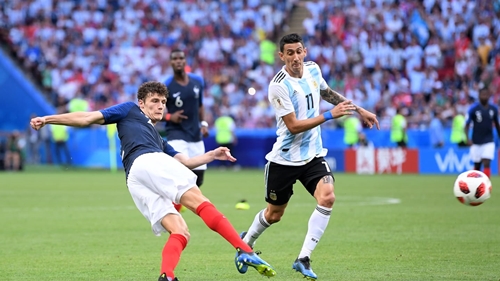 Benjamin Pavard’s stunning strike in France’s World Cup last-16 victory over Argentina has been voted the best goal of the 2018 tournament in Russia.

According to FIFA, in an online poll where over three million fans casted their votes, Pavard’s outside-of-the-foot rocket for France against Argentina, in which he displayed marvellous technique, was voted the Hyundai Goal of the Tournament.

The 22-year-old who had spoke on goal after the match said: “I didn’t even think about it. I just tried to get over it and keep it down.

“The ball bounced up as it came to me. I was trying to hit it in the direction it came from, which is what the strikers always tell me. When the ball went in I just felt so happy.”

Pavard becomes the first European player to win the Goal of the Tournament accolade since its creation in 2006. At Brazil 2014, it was bestowed on eventual adidas Golden Boot winner James Rodriguez, whose venomous, dipping volley also later earned him the 2014 FIFA Puskas Award.

Other previous winners include Maxi Rodriguez (ARG) and Diego Forlan (URU) winning in 2006 and 2010 respectively.