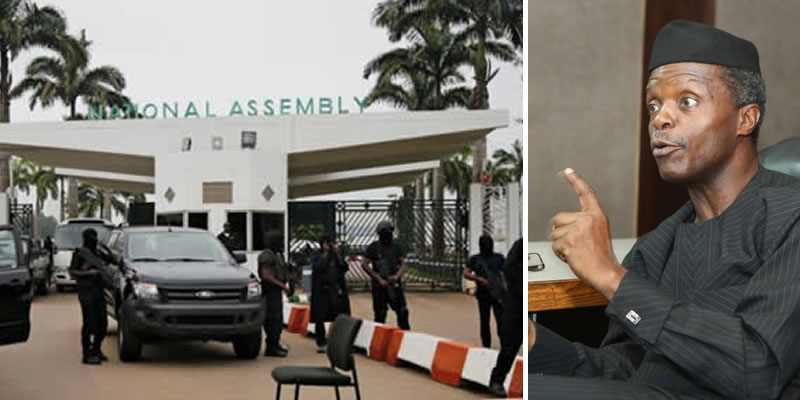 Osinbajo reacts to ‘NASS Takeover’, says not authorised by Presidency

Vice President turned Acting President, Yemi Osinbajo, on Tuesday said the takeover of the National Assembly by security operatives earlier in the day was a gross violation of constitutional order.

Acoording to Yemi Osinbajo, the takeover of National Assembly was not authorised by the Presidency.

Osinbajo’s Senior Special Assistant on Media and Publicity, Mr. Laolu Akande, made the Acting President’s position known in a statement made available to journalists.

He promised that all persons within the law enforcement apparatus who participated in the siege would be identified and subjected to appropriate disciplinary action.

The statement read, “Acting President Yemi Osinbajo, SAN, has described the unauthorised takeover of the National Assembly complex earlier today as a gross violation of constitutional order, rule of law and all acceptable notions of law and order.

“According to him, the unlawful act, which was done without the knowledge of the Presidency, is condemnable and completely unacceptable.

“By this statement, Professor Osinbajo is consequently assuring Nigerians that all persons within the law enforcement apparatus who participated in this travesty will be identified and subjected to appropriate disciplinary action.”