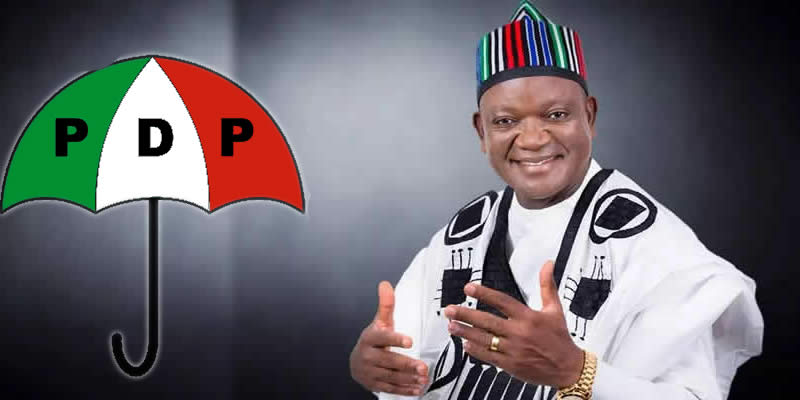 The Benue State Governor, Dr. Samuel Ortom, on Monday took over the control of the Peoples Democratic Party in the state.

We had on earlier reported the handover of the PDP leadership to the governor on Monday.

He said, “The party is officially handing over the party in the state to the governor of the state; he is now the leader of the party. This is the first meeting of the harmonised body of the PDP; with this body, we can win any election in the state.

“Secondly, we have also harmonised the party structure in the state to accommodate those returning to the party.

“Thirdly, we have set up integration committee to ensure proper harmonisation from ward to state levels,” Mark said.

He further said that with the development, there was no more faction in the party.

Mark, who commended party leaders in the state for their selfless service to unite the party, charged all party members to be part of the three-man committee set up to integrate the old and returning members.

The former governor of the state, Gabriel Suswam, who announced the decision of the leaders to concede some party positions in the state, said the governor had agreed to give those affected in the state working committee appointments in the government.

He also announced that the governor had decided to procure forms for all the ad-hoc delegates across the state.

Speaking earlier, the state party chairman, John Ngbede, said with the development, the party had been fused into one indivisible entity without factions.

Ngbede announced the constitution of an integration committee which he said would ensure the unification of all members both old and new with him as the chairman and David Tsevende as secretary.

Other members of the committee, picked from across the senatorial districts of the state, according to him, are Prof. Jacob Omenka, Solomon Agidani, Mr Oklo Eneje, Jerry Iorhide, Rt. Hon. Mzenda Iho, Mr Solomon Kachina, Godwin Donko and Timothy Iorchor.

While responding, Ortom appreciated the party leaders in the state for the leadership bestowed on him and promised not to disappoint the party.

The governor said he was happy that the party in the state had been united.

READ: Any Benue State indigene who votes for Buhari in 2019 will be cursed — Head of Indigenes, Moses Aji

“I’m happy that the unity the party at national level preached had been consummated and with the integration process,” he said.