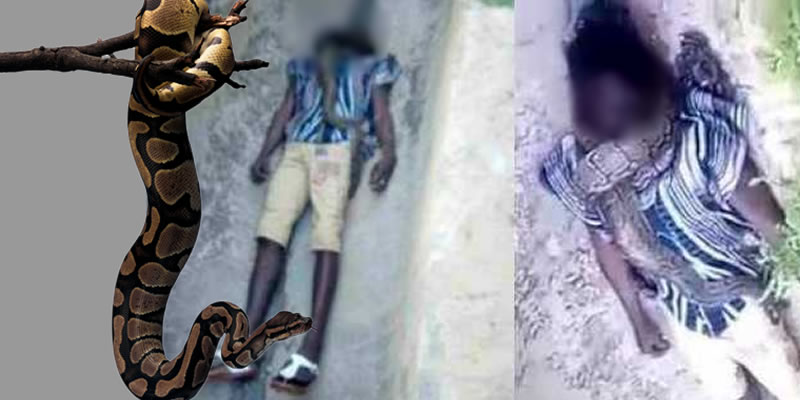 Man strangled to death by his pet python

A snake lover in Damongo in the Northern region of Ghana has been strangled to death by his own pet python after it wrapped itself around him under bizarre circumstances.

The man, identified to be Mr.Samed, met his untimely death whilst on his way to a friend’s baby naming ceremony party.

Watch the Video below;

The victim who was a pillion rider on a motorcycle had the friendly snake coiled around his neck.

Luck, however, eluded him when the python, generally described to be a friendly pet became untamed after a minor accident.

The now cold-eyed python couldn’t differentiate between its owner and onlookers who tried to rescue him as it became sore towards anyone who draws closer to it.

‘Poor Samed was strangled to death by the python after it girdled itself around his whole body.

Sources say Samed uses the snake as a fountain of magical powers to charm money for his clients, a practice which is common among a section of the youth.

In the early hours of the day, some eyewitnesses say they sighted him with the same snake charming money.