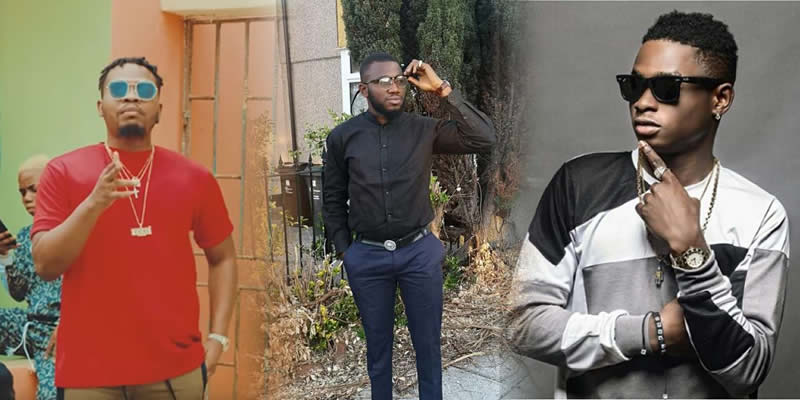 Wale Applause, the talent manager who once manage street pop act, Lil Kesh has just released a ‘tell all’ article where he revealed shocking details of how artist managers suffer and how Olamide sacked him for going on a twitter rant.

In his words, ‘talent management entails giving up your life for someone else. For the first time, let me say this, I gave over 2 years of my life to Lil Kesh, God used me and Olamide to make him a star’.

Why Olamide sacked me;

‘Here is the reason why i got sacked the first time. I cannot be very specific about the time, but it was when Shoki and Dorobucci were blowing at the same time. My sources said to me that Don Jazzy had gone to lobby the MTV base award for Dorobucci and Reekado Banks was going to come on stage to get the award. I was told that what that translated to was that Reekado Banks was going to win Next Rated at the Headies. I had worked so hard than to make that happen.

Now we had Shoki, Gbese, Efejoku. I tried my best but i was just one person. Alas Dorobucci won the award and just as told, Reekado banks was on stage to get it. I went bonkers. Abfresh who was to later manage Lil Kesh just got back from Uk at the time and was staying at my place. I was so sad, i went on twitter and rant. I did rant and mention Don Jazzy well.

Then i called Olamide’s attention to my tweets, told him i was sorry it was just a moment of madness, i had rights to be angry. I got a shocker the next day when Olamide told me i wouldn’t manage Lil Kesh again because of a twitter rant from someone like me, only for him to go on the stage at the headies to declare Lil Kesh Winner himself. I am sure we all remember how that went.

READ: How I discovered Lil Kesh, picked him up from street in Bariga – Viktoh

I remember watching the Headies in my father’s house in Ibadan as i was jobless, i cried when Lil Kesh wasn’t given the Award, i wanted him to win it for me. I thought my night was bad enough, not until Olamide came on stage to rant and i started wailing.

My parents could not console me. I was wailing because all i did was rant on twitter and i became jobless for several months, Olamide goes on stage to disorganize a well organized award and he is tagged a hero even by himself. This pot of beans life.

As a rookie manager back in the days, Osi was a rookie OAP too, i like to work with people like that because in my head we trying to help each other grow, i thought wrong. Back when Osi used to be the errand boy in Beat fm before the advent of twitter which made him a pseudo celebrity. He was on the midnight show and back then i paid him good money.

I cannot specifically remember the amount, but i am sure it was good money because YES i used to throw money around, ask about me. I would always have to stay awake at midnight to listen in to his show,he would not play my music.

READ: DJ Cuppy And Asa Asika Spark Breakup Rumor As She Reveals Farouk As Her Type

I would call, he picks when he likes then i will beg him to play my music, at least i paid for it. Sometimes he played, but at a time when we both know most human beings are sleeping, i wonder who he was playing for. This was a time Beat Fm was the Alpha and Omega of radio. Another person you do not need in your corner is Olisa of Beat fm, he most likely will charge you in dollars.

In short as an artiste manager, throw Beat Fm and all the OAPs away, you do not need them. Forget what you been told. They never played lil Kesh’s shoki and Oritshefemi’s Double wahala until they became monster hits.

Do not be fooled, we all doctor numbers, Youtube, Soundcloud. The way we do it is the difference. While some buy virtual views, some of us buy real view which wouldn’t amount to fans, but we need the numbers, viewers will not watch a video with 18 views.

What we do is advertise the link, it gets published on Asian sites, you know the population in Asia,YES that’s what we all do, forget about the congratulatory artworks about millions of views. Yes they are real views but they do not amount to your fan base, indeed you need the numbers.

Think i am lyinh check www.pushpowerpromo.com. That is where most of your music distributors go, there are others though but this is very effective, cheap, real views and accept Nigerian cards.

If you work with him, you would hate yourself. Forget the hype, when you blow, he will come kissing your as$. He is usually like that. only a good person on social media also if and when you are a celebrity/ As an artiste manager and new artiste, avoid Dj Spinall like a plague.

Dj Consequence, Dj Ruud, Dj Debby, Dj Factor, Dj Prince, Dj Spicy there are a few of the uptown djs you need, but you would not go empty handed. Anything less than 100k and you will be wasting your time and money.

You can do 100k and above, you are in good hands.  One Uptown Dj that will always stand out for me is Dj Neptune. Look for him, become his friend, make him like you and you good.

You may also like this too; A Short History Of Sound Sultan And 2face Idibia’s Twenty Year Friendship