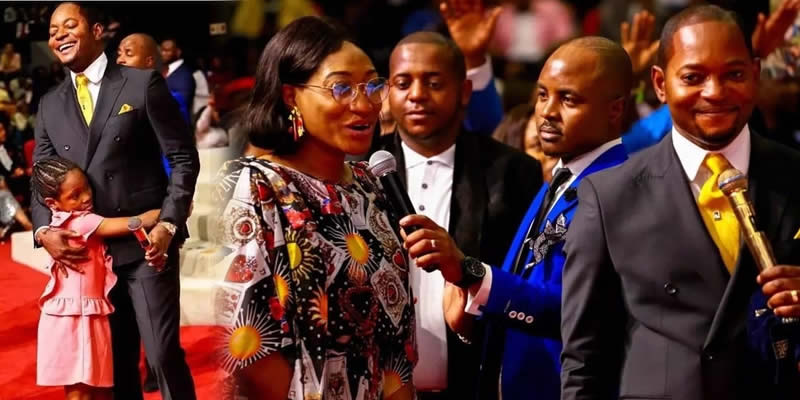 Actress Oge Okoye was spotted in the church of a very popular pastor in South Africa. The beautiful lady also took her daughter along with her. Oge sobbed and wept as the South African minister prayed for her

Nollywood actress Oge Okoye is a popular veteran in the film industry who dazzled many fans with any role she played in a movie. Her several acts in the Nigerian movie scene have left many unsuspecting that she could in any way be very spiritual.

The beautiful lady has, however, proven that she can be very spiritual and religious. Recently, the the actress was spotted in a popular church which belongs to a very controversial pastor.

The church named Alleluia Ministries International belongs to one Alph Lukau, a pastor known for his extravagant and lavish lifestyle. The pastor who owns a very large auditorium in South Africa hosted the actress during a church service.

READ: Nigerian pastor slammed for questioning the absence of Anita Oyakhilome at her daughter’s wedding

Troll blast Oge Okoye over mode of dressing, advises her to get…

He also specially ministered to her and prayed for her. Oge Okoye did not, however, go alone. She went along with her beautiful daughter. Alph also attended to the little girl who he hugged and cuddled.

From the pictures, the wealthy South African pastor could be seen holding two pictures which belong to the actress. These old photos showed a little girl and a grown up adult as well.

With regards to the images, it can be inferred that the pastor was praying and prophesying on the characters contained in them. This is quite common with many Pentecostal pastors.

Soon enough, Oge sobbed soberly as the pastor ministered to her. Although the reason for the visit of the actress to the South African based church is yet to be known, the pastor has, over time, been appraised for working miraculous deeds such as prophesying and even raising the dead. This certainly hints at the purpose of the celebrity’s call on his assembly. You may also like; God gave me this endowment so you have to see it — Actress Nkechi Blessing