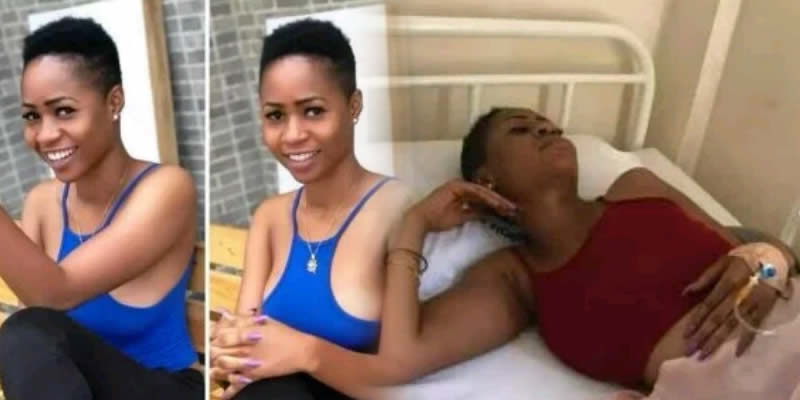 A popular Ghanaian slay queen identified as Charlotte Abena Woodey, has reportedly died in what could be considered as a mysterious manner after she was struck with a strange illness.

Abena Woodey, who is widely known across Instagram in the West African country, is reported to have died after battling with the yet-to-be-disclosed illness.

However, the news of her death is fast spreading on social media with many people who knew her both in real life and virtually, sending in words of condolence to the bereaved family.

Abena Woodey’s death was reported in one of the biggest and active Facebook groups in Ghana known as Inna Real Life. Although the cause of death is currently not known, some social media users have latched on to a conspiracy theory that the young lady died as a result of her relationship with ‘Sakawa’ boys (internet fraudsters) who used her for money rituals.

READ: Actress, Queen Lissa sends nude video to Movie producer to secure a role; Wife leaks it after seeing it

One Facebook user also claimed that Abena Woodey died after she went in for the boyfriend of a certain lady and was cursed as a result. Since the death was reported, many of her close friends have taken to social media to mourn her passing with others still in shock over the news.

Many social media users especially on Facebook, have posted pictures of the late slay queen on their walls to announce her death and also eulogise her.

Abena Woodey was noted for her many photos she posted online dressed in skimpy outfits which were more often than not, captioned wildly.

Her last video which was sighted on Facebook showed when she was full of life and while celebrating her birthday with friends.

A photo believed to be the last photo she took saw her laying on a hospital bed and appearing to be in pain.

You may alsolike to read; 19-Year-Old Gay Boy Allegedly Stabbed To Death