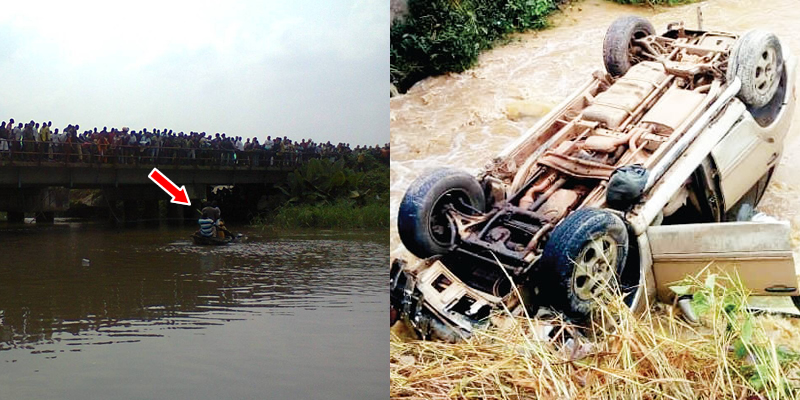 A Lexus SUV plunged into a river behind EFAB estate in the Federal Capital Territory Abuja on Monday, October 29th, leading to the death of a young man simply identified as Kingsley.

The deceased, identified as Kingsley lost his life after a Lexus SUV lost control and fell into a river behind  EFAB Estate, Lokogoma District, Abuja, on Monday.

Two other occupants of the vehicle survived the crash which occurred in the morning after the SUV fell off a narrow bridge and landed on its back in the flooded river.

Northern City News learnt that residents rushed to the scene and rescued the occupants, but Kingsley, who was the first to be rescued, inexplicably returned to the water and was swept away.

His body was found later in the afternoon by divers.

An eyewitness, who identified himself as Patrick, said he was in his room when he heard a loud noise from the scene, adding that some residents said they saw the driver on top speed before the crash.

He said, “I was hearing a shout from my room; so, I came out and saw people trying to bring the driver out of the vehicle.

“We had to smash the windscreen to bring him out of the car but in the process of doing that, he was beginning to drown and we managed to bring him out and took him to the hospital, but the third guy who was in the back seat drowned and we couldn’t find him.”

A resident, Peter Monday, said the driver was speeding when he crashed into the river.

“I don’t know whether he was trying to avoid hitting an Okada man (commercial motorcyclist) when he crashed into the river. We waded into the river and rescued the three occupants,” he stated.

Monday further explained that, “We broke the windscreen and brought the three of them out of the vehicle.

“The first person we rescued later came back into the river shouting that his uncle was inside the car.

“He came back into the river and was swept away; maybe it was because he was weak and could not withstand the fierce current.

“We spent over one hour looking for his body, but we couldn’t find it.”

The FCT police spokesman, Anjuguri Manzah, said he was not aware of the incident.