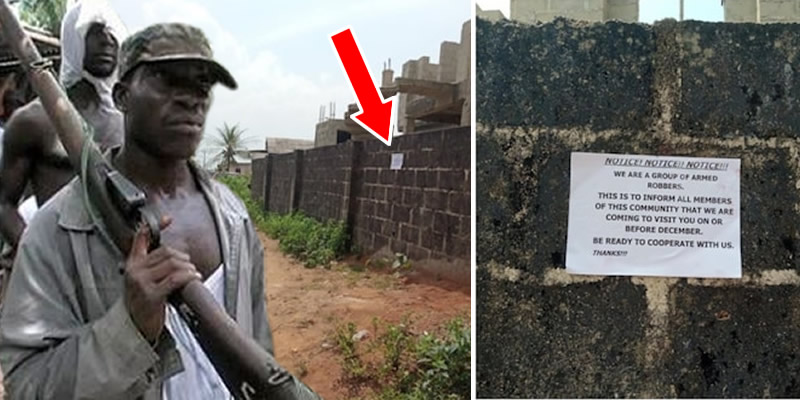 A Nigerian man identified as Temitope Awesu, earlier took to social media to cry out for help after some armed robbers reportedly pasted a notice about their plan to rob his community in the areas of Upward Estate, Ojih Bus Stop, Igbogbo in December.

Calling on the government and police to come to their aid, Awesu shared photos of the notice that reads: This is to inform the community that we are coming to visit you on or before December. Be ready to cooperate for us 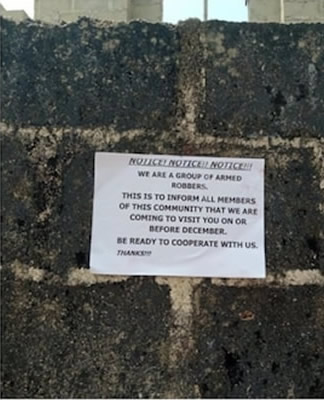 In a similar scenario, angry robbers left a note behind at the residence of a victim in Ogun State, telling them they are comming back and wishing them good luck.

Frustrated by the absence of their victims from home, suspected robbers penultimate Saturday left a note threatening to come back. 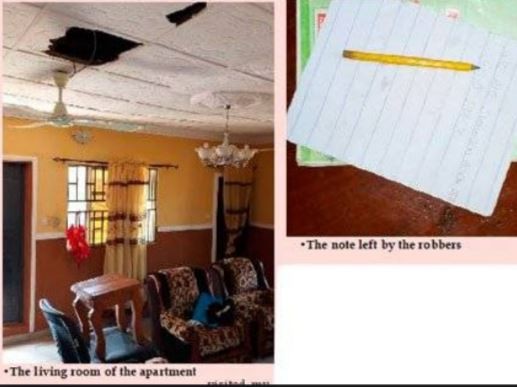 The incident happened at Grace Estate, in Iyesi area of Ado Odo/Ota Local Government Area of Ogun State, after the robbers broke into a three-bedroom apartment when the occupants were away from home.

According to reports, the robbers were said to have made attempt to enter the apartment through the main entrance to the building, but they could not open the main door. It was said that the robbers broke into the building through the ceiling of an adjoining flat and carted away one of the electronic gadgets in the house.

They were also said to have made attempt to break into the rooms, but the doors were too strong for them to unlock or vandalise. Apparently frustrated over their not too successful operation caused by the absence of occupants of the building, the hoodlums were said to have left a note promising to return at no given date.

The note sighted by our correspondent reads: ‘’We are coming back o !!! Goodluck.’’ The incident was reported to the Obasanjo Farm Police Division, Ota. It was learnt that policemen from the division visited the scene, while the Divisional Police Officer (DPO) of the station had directed his men to embark on constant patrol and surveillance of the community to keep the gang in check.

Speaking with The Nation, the owner of the building, Dare Ogunyombo explained that he was away from home for some days with his family, when the gang visited his residence.

He said: ‘’the suspected robbers visited my residence while I was away from home with my wife and children. They ransacked the house and scattered everywhere.

They also made attempt to enter my room but the door was too strong for them to unlock or break. I guess they were in a hurry to rob and because they were frustrated, they left a note on the table threatening to come back for me and my family.’’

You may like to read; 18-yr-old Man kills mother, makes love to her corpse for money ritual in Benin