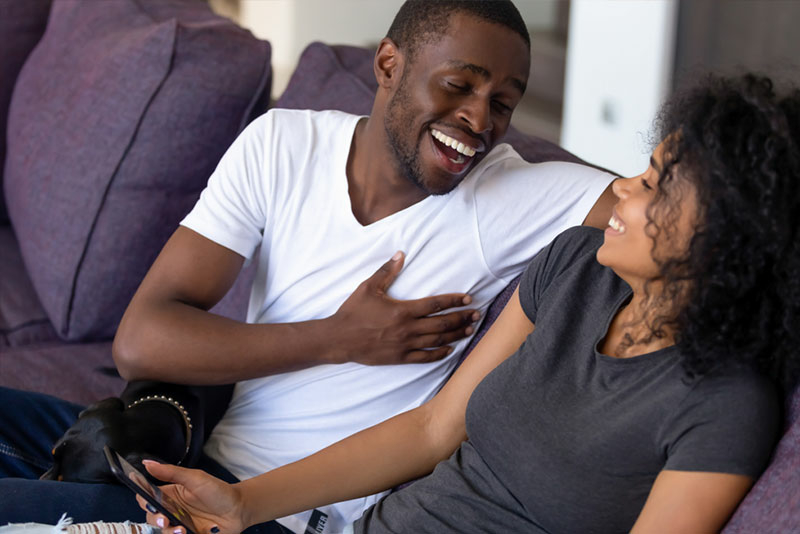 Having a top sense of humour is a fundamental requirement in most relationships – and lots of people consider a lack of it to be a total dealbreaker. Arguably, having a laugh is way more important than a person’s looks or how much money they have as it means you can enjoy each other’s company no matter what.

According to one study, poking fun at each other can actually strengthen a relationship – as long as you’re both laughing. Obviously there is a line and we’re not talking about hurling abuse at one another or making snide comments to put each other down, which is not acceptable.

We’re thinking of stuff more along the lines of having a giggle when they look silly in a new outfit, or teasing them about things that aren’t too serious.

According to Joyscribe, Jeffrey Hall from the University of Kansas conducted 39 studies involving over 15,000 people over the course of 30 years. One of his key findings was that humour is a critical part of building a successful relationship. So if you’re reading this and can’t remember the last time you had a proper laugh with your other half then it might be time to do something about it.

In one of Hall’s articles, Humor in romantic relationships: A meta-analysis, it says the ability to laugh together playfully actually builds security between partners.

Similarly, research from Appalachian State University says one of the strongest indicators of a healthy relationship is a couple who are comfortable enough make fun of each other on a regular basis. Again, the key is that both people find it funny.

In a statement about his work, Hall explained: “People say they want a sense of humour in a mate, but that’s a broad concept. That people think you are funny or you can make a joke out of anything is not strongly related to relationship satisfaction.

“What is strongly related to relationship satisfaction is the humour that couples create together.

“Say you and your partner share a quirky sense of humour, but romantic comedies or sit-coms do nothing for either of you… It’s not that any style or a sense of humour is any better or worse.”

He added that it’s important that you share a sense of what’s funny, as it affirms you and affirms your relationship through laughter.

“Playfulness between romantic partners is a crucial component in bonding and establishing relational security. Particularly shared laughter, is an important indicator of romantic attraction between potential mates.”

However, Hall explained that having an “aggressive” sense of humour in the relationship it can be a bad sign.