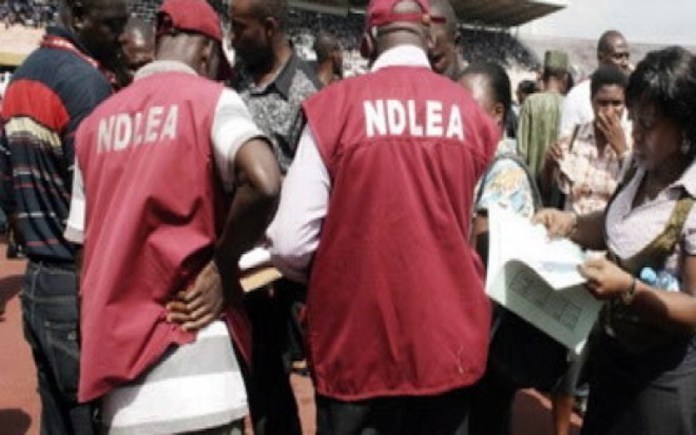 The Edo State Command of the National Drug Law Enforcement Agency (NDLEA) has intercepted a vehicle conveying about 238 kilogrammes of substance suspected to be cannabis to Port Harcourt in Rivers State.

According to the News Agency of Nigeria (NAN) Mr Buba Wakawa, the State Commander of the NDLEA, who disclosed this to newsmen in Benin on Tuesday, said the vehicle belonged to an inter-state cannabis smuggling syndicate.

He said, “The suspect is being held in connection with unlawful possession of 17 bags of dried weeds suspected to be cannabis weighing 238 kilogrammes hidden in a false compartment of a bus.

“The arrest took place at Abudu along the Benin/Agbor Road based on intelligence report.

“Preliminary investigation revealed that the J5 Bus with registration number Lagos XL 591 MUS conveying the cannabis took off from Ifon in Ondo State and was going to Port Harcourt when it was intercepted by officers of the Irrua Area Command.

“The syndicate used the mode of concealment to smuggle drugs undetected. There were few empty crates of beer to mislead officers that there are no goods in the bus, but fortunately, they were caught in the act.

Wife confronts husband and his sidechic at a hotel in Benin

“We are working to bring all members of the criminal group to justice.”

Meanwhile, the 48-year-old suspect, who claimed to hail from Delta and married with four children, admitted transporting cannabis to earn a living.

He said, “I attended primary school in my home town, Owhelogbo in Isoko North Local Government Area, and after my primary education, I learnt welding from 1989 to 1994.

“However, in 1995 I changed my career to driving and I transport cannabis to earn a living, but I am not the owner. They gave me N25,000 after fuel and other expenses to deliver the drug.”

However, the Commander said that the suspect would soon be charged to court.

BBNaija: “Who should I vote on BBN” — Regina Daniels asks

Woman who has been on NDLEA watchlist for 10 years over sale of cannabis, arrested in…