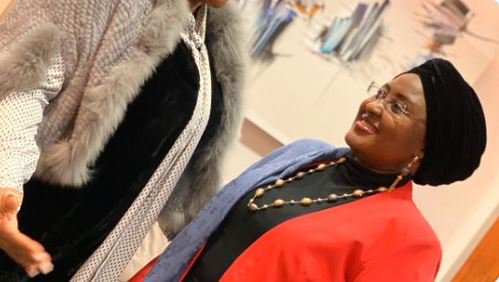 UPDATED: Aisha Buhari on her way back to Nigeria from UK

Aisha Buhari, the wife of President Muhammadu Buhari, is currently on her way back to Nigeria from the UK.

WITHIN NIGERIA recalls that Aisha Buhari, who had not been involved in public engagements of recent found time to tweet about the sex for grade scandal and the International Day for Girl Child during the week.

Aisha has reportedly being out of the Country for over two months now and her absence is in protest of the recent happenings in the Presidency. Her absence became obvious after she did not appear alongside the President at some important official functions.

The president’s wife announced that she is returning to the country via her Twitter handle, saying the “Wife of the Nigerian Ambassador to the United Kingdom, Mrs Modupe Oguntade seeing me off”.

Wife of the Nigerian Ambassador to the United Kingdom, Mrs Modupe Oguntade seeing me off. Thank you so much madam pic.twitter.com/nzpQenhq78

#EndSARS: ‘We are reviewing all evidence’ — UK speaks on petition to…