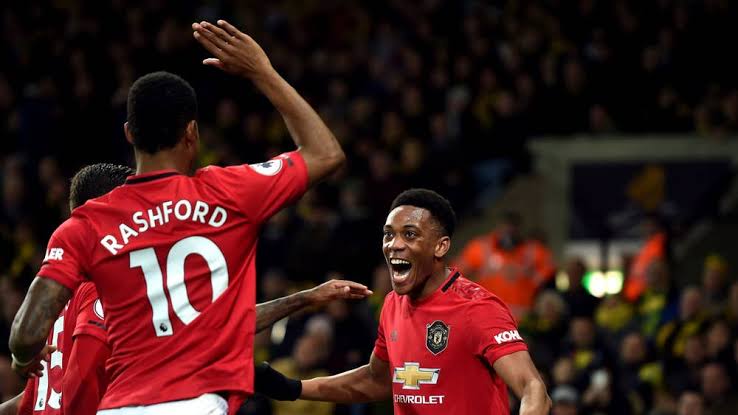 Manchester United finally ended their dismal Premier League away record with an emphatic 3-1 win at Norwich despite missing two penalties on Sunday.

Scott McTominay fired United into a first-half lead before Marcus Rashford and Anthony Martial each netted  and then both missed VAR-awarded penalties.

United not only halted an eight-month wait for an away league win, they did it with the style and panache that their travelling fans had been craving.

It was not quite a throwback to the glory days, especially against an out-of-sorts Norwich side so lacking in confidence, but the performance was a step forward for under-fire United manager Ole Gunnar Solskjaer.

Injury-plagued striker Martial had been urged by Solskjaer to fill the void left by Romelu Lukaku, and the Frenchman put in a hugely impressive performance.

The win lifts United up to seventh in the Premier League, seven points off the top four, while Norwich remain 19th.

Yet the atmosphere was soon heated in an incredible first half which saw two well-taken goals and two missed penalties.

Things may have been different if Todd Cantwell had not blazed a fifth minute sitter over David De Gea’s bar following Max Aarons’ marauding burst.

Yet the visitors soon settled into their stride and a clever exchange of passes between Martial and Rashford forced the first of a series of stunning saves from Norwich keeper Tim Krul.

The United winger seemed to lean into Godfrey and referee Stuart Attwell waved away muted penalty appeals, only for the VAR referee to scrutinise replays of the incident.

Yet, on the half hour mark, the England striker notched his 50th goal for United with a slick finish from James’ cross from the right.

Attwell had another decision overturned by VAR on 41 minutes, after he initially awarding a corner when Cantwell blocked Fred’s strike on goal.

This time the replays ensured the right call was made as the Norwich midfielder clearly raised his arm to an unnatural position to deflect Fred’s shot to safety.

Martial took responsibility from 12 yards this time, only for Krul to dive to his left and save again.

Canaries boss Daniel Farke made a double change at half time, introducing Onel Hernandez and Marco Stiepermann for Cantwell and Moritz Leitner.

Yet Martial sealed United’s long-awaited win on the road with a wonderful finish from a sumptuous return pass from Rashford on 73 minutes.

There was no way through the United rearguard, which was superbly held together by Harry Maguire, until a late slip-up by McTominay allowed Hernandez to drill in an 88th-minute consolation goal.