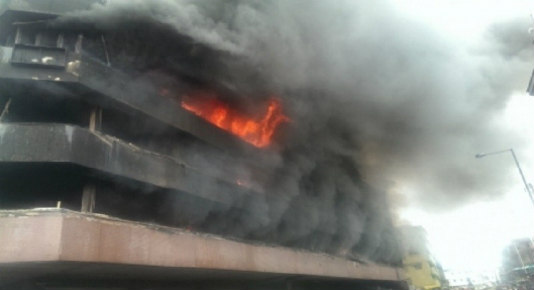 Fire reportedly breaks out at Amuwo-Odofin

Information reaching us has it that fire has broken out in a building housing six flats at Mile 2 Estate, Amuwo-Odofin, Lagos.

As at the time of filing this report, the cause of the fire was not immediately clear. However, efforts are ongoing to put out the fire.

Reports say the affected building is located behind a central mosque in the estate.

In a related development, Corporate Affairs Commission Headquarters In Abuja Gutted By Fire.

Days after fire razed the top floor of the office of the Accountant General, the headquarters of the Corporate Affairs Commission located in Maitama, Abuja has been gutted by fire.

WITHIN NIGERIA learnt that the fire reportedly engulfed the last floor of the seven storey building, destroying valuables and other items.

As at the time of reportage, the cause of the fire is yet to be ascertained but fire fighters have arrived the scene to put out the inferno.